It has vastly different functions in each title, but tends to focus on debuffs and unique black magic abilities.

Arcanist is a pet-using DPS class with a focus on damage over time abilities with a few direct damage spells such as Ruin. Arcanist additionally has a few support abilities such as the ability to Raise and the potential to heal to a certain extent, though this wanes quickly. Arcanist's weapon of choice is the grimoire.

Arcanist can be upgraded into the Summoner (DPS) and Scholar (Healer) jobs at level 30 after a quest. Arcanist is currently the only class that can promote into two distinct jobs and the player is able to level them both concurrently.

Arcanist is a job for the nu mou. It specializes in destructive Arcane Magick, with abilities learned from rods. Arcanists have a large base MP pool, useful for their advanced spell portfolios. 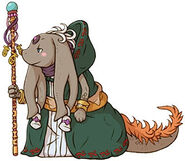 Artwork from Final Fantasy Tactics A2: Grimoire of the Rift.