Arcane Defense is a support ability. The White Mage class learns it for 400 JP. A unit equipped with this ability will suffer less damage from magic attacks. 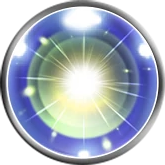