A shy young man who grew up with Luneth, Arc is discerning and intelligent, and can often be found with his head buried in a book. Considerate and kind, he strives hard to live up to his destiny as a Warrior of Light.

Arc is a playable character in Final Fantasy Record Keeper. He is automatically recruited in Tower of Owen on Classic in the storyline of Final Fantasy III as the First Time Reward.

Arc is a Warrior of Light. Appearing as a White Mage, his combat role is Healing Magic.

Of the many White Mage/Summoner hybrids in the game, Arc is perhaps the most unassuming. A mid-game acquisition, Arc will easily replace the Core White Mage for the player's healing needs barring entry of a more popular ally like Aerith, Rosa, Yuna, Garnet, or Eiko. He is the only Summoner in his delegation, which adds to his value against the large enemy groupings in the first three Realms.

His initial Soul Break is Mass Shell which at the expense of one Soul Gauge segment gives the party Shell. 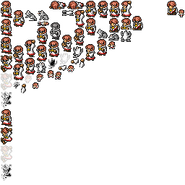 Icon for Knowledge of Healing.

Icon for Knowledge of Purification.