Another orphan raised by Topapa, and Luneth's best friend. Unlike Luneth, he prefers reading over gamboling in the wild. His studies endow him with great knowledge that more than makes up for his shyness.

Arc is a playable character in the 3D remake release of Final Fantasy III. He is one of the Warriors of Light, and is first encountered in Ur.

Arc is the shortest party member with brown hair and freckles. His Freelancer outfit consists of a yellow shirt covered by a long green coat, a white mantle, and a yellow scarf. He wears fingerless gloves, fitted black pants, and brown knee-high boots. His theme color is green, shown in his job armors, while his scarf is visible when robe-clad. Arc's silver belt buckle distinguishes his job outfits from his allies. In the opening FMV, Arc is depicted as a Black Mage.

Doga and Unei describe Arc as the light of kindness, made clear when the party meets Alus Restor in war-torn Saronia. Arc can relate to the young prince, as he himself initially lacked self-confidence and believed himself to be cowardly. What Arc lacks in strength, he makes up for in intelligence. Despite his shyness, Arc is noble and helps those in need.

Being a victim of bullying, Arc initially suffers from low self-esteem. He looks up to his childhood friend Luneth as a role model, and admires his outgoing and optimistic qualities. He is grateful to Luneth for defending him when he was being harassed, and for always trying to encourage him. Arc regrets becoming Luneth's "burden" and flees after the boy returns to Ur as a Warrior of Light. Arc is determined to grow strong on his own so Luneth wouldn't feel obligated to protect him anymore.

Arc is Luneth's childhood friend, both raised by Topapa and Nina. When rumors of ghosts in Kazus reach Ur, Arc tries to convince a group of children that ghosts do not exist, but they belittle him. When Luneth arrives after encountering the Wind Crystal, Arc is too ashamed to speak to him and flees. He ventures to Kazus to prove he's not a coward, but the sight of the people affected by the Djinn's curse frightens him. When Luneth follows, Arc asks to accompany him. He is chosen as a Warrior of the Light after defeating the Djinn with Luneth, Refia, and Ingus, and remains with the party afterward.

Later, Cid Haze tells Arc and the others that they are orphans from the surface world. They and their parents were aboard Cid's airship when Xande flooded the world with darkness, causing the airship to crash on the Floating Continent and killing their parents. Arc and Luneth were found near Ur and adopted.

When the party's airship is shot down in Saronia, they find the exiled prince Alus Restor being bullied in a pub. Arc leads the party in defending him and Alus joins them temporarily. He and Arc befriend as Arc empathizes to his feelings of being weak and frightened. He helps Alus gain the confidence to talk to his father, King Gorn, and ask him to stop the civil war; Arc reassures Alus his father must still care about him. When they are admitted to the castle, King Gorn enters the room during the night and almost murders Alus, but turns the knife on himself at the last moment, and it's revealed he had been under the control of Gigametz. Arc and the others defeat him, but Gorn dies and Alus succeeds to the throne. Arc assures him that he will do a great job.

After defeating the Cloud of Darkness, Arc returns to Ur with Luneth.

Arc's battle prowess is determined by the job he is using. He starts a Freelancer, but after making some progress, more jobs become available, and the player can freely change between them and accumulate progress in each. Whenever a character gains a level, their maximum HP increases by a random amount, thus, changing to high-vitality jobs—like Monk, Knight, Viking and Black Belt—before leveling up makes it easier to max out HP. Strength, Agility, Vitality, Intellect, Mind and MP are determined by a character's current level and job.

At the end of a victorious battle, Arc stands with his right hand over his heart. When he gains a level or a job level, he will jump into the air and raises both arms.

Arc has appeared in the following Final Fantasy games:

Arc appears in the Final Fantasy: Memory of Heroes novelization as one of the main characters of the Final Fantasy III adaptation. He is portrayed as having a connection to Bahamut, hearing the dragon speak as the orphans and Desch flee from his nest, telling Arc to call upon him when needed. Arc calls upon him during the final battle with the Cloud of Darkness, able to speak and hear him even then. Arc's cowardliness is downplayed, only explained to the others by Luneth during the Saronia chapter. Arc uses the Black Mage and Summoner jobs.

Arc's appearance in concept art slightly differs from the final, notably, his scarf is paler yellow with colored stripes near the ends and he lacks the white covering at the top of his coat.

Arc's personality is fleshed out a bit more in the unused text for the remake. Arc provides suggestions for dealing with enemies, and notices when something is wrong, such as suggesting the use of ice spells for the Djinn[1] or questioning why Gutsco wanted the Horn of Ice to begin with[2]. This trait that is still present in the final game, but is more subdued. Arc also showed clearer interest in girls, such as in Gysahl where he tries to help a shepherd girl only to get pranked by her[3], or in Canaan where he and Luneth express jealousy over Salina crying over Desch[4]. Arc is also shown to be stubborn, such as when he tries to get a summoner in Replito to take him on as an apprentice[5].

Tozus has an unused scene where Desch asks if Arc is still 14[6]. His age is not given anywhere in the final game. Dummied text for Saronia shows a scrapped plot point where Arc and Alus leave the party due to Arc getting frustrated with Refia and Ingus and being determined to find the Dragoon armor by himself.[7]

Arc as a Freelancer from the opening FMV (PC).

Close-up of Arc from the opening FMV (PC). 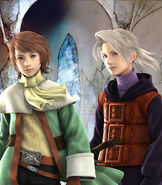 Artwork of Arc and Luneth. 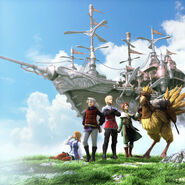 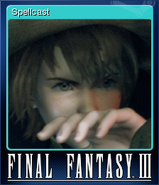 [view · edit · purge]Arc is a word of Old French origin derived from the Latin arcus. This could refer to a bow (as in bow and arrow) or an arch. It may also be a variation of "Ark", which could be an opaque reference to another character from Final Fantasy III, Noah, as well as continue the recurring theme of floods in the game's story.

Prerelease screenshots and trailers have his name romanized as "Arcus" and "Arkus".