Knight, keeper of the Coliseum

The Arbiter of Time serves the goddess of death in all her merciless splendor. All mortal beings stand as equals when they receive their ultimate judgement. Only the most powerful is chosen to pass the sentence.

The Arbiter of Time as he transforms into Valfodr.

Valfodr (ヴァルファズル, Varufazuru?), or the Arbiter of Time, is a character from Final Fantasy XIII-2. Originally a knight of Valhalla and the most powerful of the realm, he is tasked as the keeper of the Coliseum.

As the Arbiter of Time, Valfodr handles the downloadable content fights in the Coliseum, gives a background story to each enemy, and is a downloadable boss himself.

Valhalla is a world where only the strongest survive. Those who are born weak must hone their strength and skills in battle against more powerful foes. Mog heard that one of the strongest monsters around was the Knight Valfodr, so he decided to issue a challenge.

Valfodr was not the kind of monster to show mercy, even when battling the puniest of foes. Despite his total, crushing defeat, Mog was pleased with the outcome. Now, he thought, he was ready to serve the mighty.

But instead, Valfodr rejected him, saying, 'I have no use for one so weak'. Still, he left Mog alive and without a scratch. Maybe Valfodr wasn't so bad, after all?

As the Arbiter of Time, Valfodr dons a golden chestplate and golden gauntlets, covering his forearms and hands. He wears a stylized helmet, fully covering his head, including his face, and it has a flayed back extension. He wears a blood-red cape which hangs from the neckline above his chestplate. He wears a full length black and crimson robe. He carries a long, golden judicial staff in his right hand with a intricate design at the tip. His appearance is reminiscent to an ancient Roman centurion, a possible allusion to his role as the Arbiter of Time.

In his true form as the armored knight Valfodr, he is a mechanical centaur. He still wears his chestplate, although it is integrated into the rest of his body. He exposes his right arm and brandishes a mighty axe. His other hand becomes a powerful blasting gun. At the bottom of his chestplate and on his back, he has a swaying white sash. He still wears his helmet, although there is no extension to it, and his lower half transforms into four mechanical legs; the front two have two claws, while the back two are stumpier. Loose wires come out from him and he has a long, swaying tail. His general color has shifted from bright, polished gold to having a greenish tint.

Valfodr enjoys battling and witnessing the battles in the Coliseum. He often speaks in a foreboding manner. On the occasion the party refuses a fight, he taunts them, accusing them of cowardice. Valfodr is a committed knight and guards the Coliseum for Etro, and is even prepared to battle the party. Despite his power and unnerving mannerisms, Valfodr has a softer side, for he left Mog unharmed after his encounter with him.

When Mog traveled through the Historia Crux he stumbled upon Valfodr who defeated the moogle and left him alone, even though the law of Valhalla states that "the weak serve the strong".

When Serah Farron, Mog, and Noel Kreiss travel through time searching for the way to resolve the paradox in the Sunleth Waterscape at 300 AF, they come across the Arbiter of Time within the Coliseum. He demands them to leave his domain, as it is not meant for living beings to dwell in until the end of time itself. When the Arbiter mentions housing a time-shattering omen, Noel believes the omen to be a fragment, and offers to take it off his hands. Valfodr hands it over in exchange for the travelers' departure from his domain.

When Serah and Noel later return upon learning of Snow Villiers being in the domain, Valfodr reveals his true form to deliver judgment for their arrogance. Defeated in battle, the knight recognizes the two superior fighters to himself as he allows them to enter and leave of their own free will.

After Serah and Noel have defeated all the Coliseum opponents once, Valfodr proclaims that as long as the arena exists, its occupants shall continue to battle "until the bell tolls its last in time unmoving". He declares the two "champions to be challenged", and allows them to choose their fights once again. 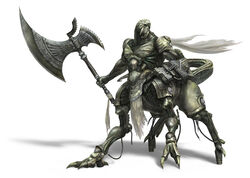 In his true form, Valfodr uses physical and magical attacks and can summon the hidden one-of-a-kind Paradigm Pack monsters; his summons vary depending on what level he's fought at (Leyak, Golden Chocobo, Cactuarama, and Chichu respectively). He can also drop the other one-of-a-kind monsters as common/rare drops. Valfodr can be fought at different levels, first level 1, then later 15, 45, 70, and finally 99. The higher the level, the more challenging the battle. His recruit chance will vary depending on what level he is fought at, with a 100% recruit chance when fought at level 99. Valfodr has the highest maximum HP in Final Fantasy XIII-2, totaling 15,500,000 in his level 99 fight.

The Arbiter of Time is voiced by Steven Jay Blum in the English version and Tomomichi Nishimura in the Japanese version.

The Arbiter of Time shares his English voice actor, Steven Jay Blum, with Vincent Valentine from the Compilation of Final Fantasy VII and Ba'Gamnan from Final Fantasy XII.

Arbiter of Time has an ice-elemental card.

No Mercy for the Judged.

The Arbiter of Time as Valfodr.

"Valfodr" is in Norse mythology one of Odin's many names and it roughly translates as "The fallen's father" or "Father of the slain". This relates to his role as keeper of the Coliseum, and is also linked to Valhalla, the realm where warriors are destined to fight for eternity. His strongest attack, Gagnrath, is one of the many names used to refer to Odin and roughly translates into "Advantage Counsel".