Aranea is a summonable vision and optional playable character in Final Fantasy Brave Exvius. She serves as a character representative from Final Fantasy XV, and has been available for summoning since the event Imperial Infiltration (which originally ran in February 2018 in the Global version).

Aranea has also appeared as a boss in the challenge event Fort Vaullerey - Battle with Aranea (concurrent with Aranea's release event, Imperial Infiltration). Her helm is one of its missions' rewards.

A captain of the Niflheim military forces spoken of in stories from the faraway land of Eos. Aranea is a dragoon that specializes in aerial assaults with her magitek lance. A former mercenary who was eventually promoted for her talents, she has gained the loyalty of her troops thanks to her caring attitude towards others, unbreakable spirit, and expertise in the art of battle. She despises Niflheim's magitek infantry, an army of robotic soldiers that serves the empire, showing a deep appreciation for her human subordinates instead.

A captain of the Niflheim military forces spoken of in stories from the faraway land of Eos. Aranea is a former mercenary for the empire who eventually earned command of her own airship, and is known to many as "Miss Mercenary." Although she somewhat tolerated the empire's use of a magitek infantry as its main means of warfare, once they began experimenting with daemons for the same purpose she gradually came to doubt the empire's intentions. Clearly making a distinction between her job and her personal life, she refuses to carry out any orders not pertaining to her assigned mission.

Aranea is a 5-7★ Rare Summon; her job is listed as Commodore, and her role is Physical Damage. She has no innate element or status ailment resistances. Her Trust Master reward is the Stoss Spear, a two-handed spear with an Attack power of 140 and which grants the High Jump passive (increases Jump damage by 100%). Her Super Trust Master reward is the passive ability Sky Lancer.

Her awakening materials are the following:

Aranea's stats at her highest levels are as follows (with no passive abilities taken into account), along with the maximum amount of stat points that can be increased through pot-enhancements:

Aranea has four ability slots, but no magic affinity.

Highwind (エア・スペリオリティ, Ea Superioriti?, lit. Air Superiority) is Aranea's Limit Burst. A damage-type ability, it is a 1-hit attack that deals partially-unmitigated physical damage to one enemy, ignoring its DEF by 50%.

The damage modifier will depend on Aranea's LB level: 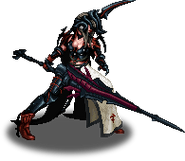