Aranea's natural aptitude for airborne combat helped her soar to new heights both literally and figuratively. Magitek lance in hand, she rose through the ranks just as easily as she rose through the air in combat, earning her the official title of 'commodore' and the unofficial nickname of 'dragoon.'

Aranea appears as a boss and a guest party member in Final Fantasy XV and its DLC scenario Episode Prompto. She embodies the classic Final Fantasy class Dragoon, able to fight airborne, uses jump attacks, wears black armor and wields a lance. She is agile and powerful, and when in the party as a guest can perform link-strikes with the player character and use Techniques. Unlike the other guest characters who only join as part of the story, Aranea has a chance of appearing randomly to help the party fight night time enemies like daemons and hunt monsters that are available at any time of the day in Chapters 8 and 15.

Aranea is fought during Imperial Infiltration. She employs her signature move, Highwind, during battle to damage the party heavily. The best way to damage her is by blocking and parrying this attack.

She was added as a training partner for campsites in version 1.21. There are four training sessions with her where she is at Lv. 26, Lv. 50, Lv. 99 and Lv. 120. Winning her at LV.99 yields an Anklet of the Gods and winning against her Lv. 120 incarnation earns a Dark Matter Bracelet. Aranea often deals continuous barrages of attacks that can drain Noctis's MP rapidly, preventing him from dodging. An easy way around this is to equip the Ring of the Lucii, as dodging attacks with the ring restores MP. However, it will not damage Aranea as she is immune to Light damage.

Aranea will join the party as a guest in A Party of Three. The player cannot customize her equipment. Her primary arm is the Stoss Spear. Her accessories are Electric Actuator, A-1 Class Powershield and Inertia Controller. Her attire is Dragon Mail.

Aranea is a mid-range fighter, using her lance to create some distance between her and enemies. She will occasionally use jump attacks on enemies. Like Cor, she has higher parameters than the main party. She is on Lv.48 with 2,848 HP, 212 Attack, 94 Defense, 184 Magic Power and 126 Spirit. Her stats can be boosted with food buffs.

Her party Technique is Highwind, which has Aranea jump into the air before diving and slamming her lance into the ground, creating shockwaves around the area. The attack deals massive damage at the cost of three tech bars. When the player character-swaps to Prompto, and Aranea is a guest member, the Tech command for her is available. This is because the two partner up in Episode Prompto.

When she rescues someone from Danger condition, she may slap them across the face.

After the party's first encounter with her in Chapter 7, there is a chance Aranea will temporarily join during nocturnal battles (00:00—03:00) on the open world, such as against daemons and hunt monsters. Her red assault craft will appear above the battle and she'll jump into the fray, serving as a guest party member for the duration of combat. Once the battle is over, she says some parting words and jumps into the air, vanishing. Aranea's magitek engine is red as opposed to the ships that drop enemies. If Aranea arrives while Noctis is using Armiger Unleashed, his Armiger is cancelled.

While in the party, Aranea participates in camps and photos. She can't be targeted by items (save items that target the whole party), has no chocobo, doesn't ride in the Regalia, blocks tour quests, and the player can't fish when she is around. Cross chain never triggers when she is in the party as a guest.

Aranea will perform linked attacks with Noctis in the main game, and with Prompto in Episode Prompto. In the main game a linked attack can happen when the player parries (called link-strike) or blindsides an enemy (called blindside link) if Aranea is near, not incapacitated or amid performing another action. The linked attack performed depends on the player's weapon. Aranea commonly ruffles Noctis's hair after a successful link-strike as a celebratory maneuver. Her link-strike animations tend to glitch much more than others'.

Aranea doesn't have her helmet in the photos when she is a guest character, even if her field model wears it. Aranea will pose in group photos, but the only photo spot one can use with her in a normal playthrough is by the Vesperpool. If the player had her in the party in other photo spots, she would be included in all of them. If the player has no pictures of Aranea saved, a selfie of Prompto with her appears in the ending credits. If the player has a saved picture with her, it appears instead.

Depending on which photo the player chooses as their "Certificate of Completion" at the end, the party will make different comments. Prompto comments on Aranea's picture (when she was a party member when the photo was taken, not photos taken from battles against her): "Hohoho... I totally know where you're coming from, dude."

There was a glitch to get Aranea stuck in the player's party after the Chapter 7 temple mission. The original version of the glitch that players discovered was to camp at Cotisse Haven north of Hammerhead, then wait until midnight and save, wait for daemons to spawn and Aranea to arrive to help. The player could then exit the combat radius, bring up the map, and Return to rest point, open the camp menu before her animation starts, and she would join. 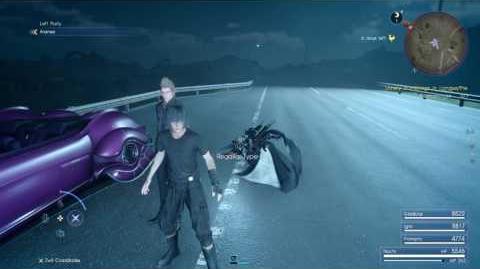 This method of keeping her in the party was patched out, but a new way was discovered using an adamantoise exploit.

Aranea would leave the party when the game resets at certain story events or quests. During the endgame the player could remove her by repeating the final battles and reloading the new clear file. The player could also remove her by going to Pitioss Ruins secret dungeon, or by summoning a second Aranea.

You Glaives just sit tight while I throw something together.

Aranea randomly cooks for the player in Final Fantasy XV: Comrades 1.2. Her Miss Mercenary's Cassoulet became available in the main game afterward, and boosts attack power, HP and Techniques. Her recipe was added to the main game since the beginning in patch 1.27 when Comrades became a stand-alone title.

Aranea joins Prompto as a guest. She doesn't have an HP bar and thus cannot be KO'd in battle, making her "unstoppable". She acts autonomously and swiftly moves through the battlefield to attack enemies. When there are no enemies, she will follow the player. She can perform the DLC episode's version of link-strikes with Prompto if the opportunity arises (see below).

She has two Techniques: Highwind is used outdoors, while Dragoon Dive is used indoors. The player can invoke Aranea to use them with the Technique command, and her Techniques cost 2 tech bars. Aranea downing enemies can make enemies weak for Prompto to use his crackshot for critical damage.

The boss battle against Barbarus has the boss climb to the ceiling, during which time Aranea can't attack it.

If the player is doing well Aranea will praise Prompto.

Aranea appears in some of the episode's Archive Highlights, and the photo ops with her do not trigger unless she is around.

The Prompto-Aranea pairing has four link-strikes: one with the knife and three with the handgun. The link-strikes trigger randomly when holding the Attack button, unlike in the main game. Link-strikes are a good way to break enemies and put them into the vulnerable state and thus susceptible to Prompto's powerful Crackshot command. Episode Prompto does not display a message on-screen when Prompto and Aranea link.

Completing the episode lets the player fight Aranea by choosing "Intensive Training" from the menu. Besting her earns another certificate of completion screen.