Aragoneu is a region of northwestern Mindartia in Final Fantasy XI. Its dry landscape hosts the capital of the Yagudo people and lies adjacent to the Grand Duchy of Jeuno. It connects to Derfland, a region of the western Quon continent, by means of the Great Jeuno Bridge. Aragoneu also borders Li'Telor, a mysterious forested territory to the northeast. 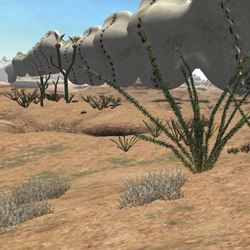 The Meriphataud Mountains are a vast array of rocky hills and crevasses lying north of Tahrongi Canyon. A gigantic bone-like structure, Drogaroga's Spine, divides them in half. Though Meriphataud is largely inhospitable, the Yagudo have established their stronghold, Castle Oztroja, in the eastern mountains and subsisted there for decades. Hidden in the northeast is the entrance to the Sanctuary of Zi'Tah, a lush woodland entirely unlike its dusty neighbor.

The winding road through Meriphataud is vital for wayfarers between the Federation of Windurst and Jeuno. Inexperienced adventurers that stray from the path may fall prey to Yagudo and Goblin patrols or the irritable Coeurls and Cockatrices native to Aragoneu. The region's outpost is located in this zone, in the northwest.

During the Crystal War the mountains offered multiple routes to Fort Karugo-Narugo in the west. Much to the frustration of Windurst's veterans, this bulwark has fallen into disrepair and is not accessible in the present day. A Cavernous Maw connects Meriphataud to itself twenty years in the past, however, and therefore provides an opportunity for time-traveling tourists to behold the fortification in its prime. 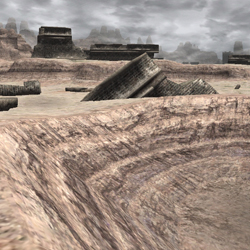 Sauromugue Champaign is a desolate peninsula reaching into the ocean north of the Meriphataud Mountains. Its bridges cross the Bastore Sea to the west and connect the windswept plains to Jeuno and the Rolanberry Fields. These connections have made Sauromugue a prime historical battleground and it is littered with dilapidated fortifications.

A Cavernous Maw links the champaign to itself twenty years in the past.

Garlaige Citadel is an underground fortress in southern Sauromugue reconstructed during the Crystal War by the Royal Knights of San d'Oria. Their intention was to surprise the Beastmen with attacks launched from the citadel. Though they were successful in this regard, their enemies eventually discovered a secret entrance and ambushed the Garlaige forces from inside. The subsequent slaughter demoralized the Alliance and facilitated the building's decline. In the present day the abandoned citadel crawls with vermin and undead horrors.

Garlaige is notable for its use of "Banishing Gates" to seal off portions of its halls. These can only be operated by four people simultaneously standing on associated pressure plates. Having survived whatever dangers linger around the switches, the party members must then race through the unlocked portal before it seals again and separates them from their companions. Clever time-travelers can avoid this process by entering the citadel from another direction, however.

Castle Oztroja is a sprawling structure carved from the eastern Meriphataud Mountains by the Yagudo. It is equipped with sophisticated security features such as password-protected gates that frustrate uninvited guests. Members of the Theomilitary patrol Oztroja's halls at all hours in defense of their leader, Tzee Xicu the Manifest.

The Altar Room lies deep within Castle Oztroja. It houses the most sacred relics of the Yagudo Theocracy, though few have ventured inside to determine what these might be. Rumors that magicite is kept here are of great interest to the Alliance of Altana.

Attohwa Chasm is a parched, broken land in eastern Aragoneu. It is accessible only through the subterranean Maze of Shakhrami. Attohwa means "arid" in ancient Mithran and its cracked earth distinguishes itself in a region of dusty wastelands by means of the toxic gas it expels. The chasm is not lifeless, however, as creatures ranging from foraging Antlions to poison-spewing Gasponia Flowers can be found in its fold.

The eastern side of the chasm features a magnificent hill called Parradamo Tor. The route to its summit is very narrow and requires climbers to leap to lower ledges without falling off completely. Navigating its face can therefore be a considerable undertaking for unseasoned adventurers.

A Cavernous Maw in the Buburimu Peninsula leads to another Attohwa Chasm in the alternate reality of Abyssea.

Boneyard Gully is a barren ravine resting atop the mountains of Aragoneu. Though nearby Attohwa Chasm features geysers of foul gasses, these emissions are concentrated in the gully. The resulting dark miasma denies access to anyone without an appropriate breathing filter. Once properly equipped, however, adventurers can challenge the Notorious Monsters that lurk in the boneyard.

Some Mithran Sin Hunters use the gully to spar with whomever can be lured to it. They demonstrate little concern regarding the noxious fumes for which the area is famous.