Aquila (アクウィラ, Akuwira?) is a character from Final Fantasy XI: Wings of the Goddess expansion pack. He resembles a Hume fomor, clad in an extravagant purple outfit (reminiscent of a Red Mage's artifact attire). One of the antagonists in the central missions, Aquila is one of the minions of the mysterious "Lady Lilith". Unlike Haudrale, he acts very childish and his behavior and manner is often comical.

Haudrale and Aquila are mysterious entities seemingly trying to alter history, specifically changing the outcome of the Crystal War in favor of the Beastman Confederate, on behalf of "Lady Lilith" for uncertain reasons. This leads into clashing with Cait Sith, who are trying to prevent history from being tampered.

He has a pet dragon named "Galarhigg", and gets extremely upset when it is defeated by the player after he summoned it out to defeat him/her. His main "weapon" is the ability to fire an energy ball from his fingers, with which he frequently makes hand gestures pretending to fire a gun when he does so. These energy bolts were used to terminate the Cait Sith beings, whom shatter like glass when struck by them (although he only managed to take out three of them).

His attitude often draws the ire of Haudrale, who even threatens him with a concealed blade. As of the December 2008 version update's missions, they are last seen greeting their dark mistress in the "Walk of Echoes". 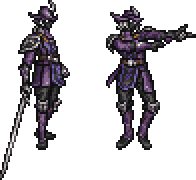 [view · edit · purge]Aquila is the Italian and Latin word for "eagle", as well as the name of a constellation.