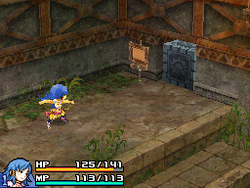 The Aqueducts (用水路, Yōsuiro?) is a dungeon in Final Fantasy Crystal Chronicles: Echoes of Time. The Hero first entered the Aqueducts to get a Buffasaur Horn for a medicine to cure the Crystal Sickness.

The Hero must enter the Aqueducts twice; once to retrieve the Buffasaur Horn for Eryll, and again to find a missing piece of the Crystal Core.

Aqueducts 1 on the world map.

Aqueducts 2 on the world map.

The first Crystal Core fragment, found within Aqueducts 2.
Add a photo to this gallery

An aqueduct is a watercourse constructed to convey water. In modern engineering, the term aqueduct is used for any system of pipes, ditches, canals, tunnels, and other structures used for this purpose. The term aqueduct also often refers specifically to a bridge on an artificial watercourse. The word is derived from the Latin aqua ("water") and ducere ("to lead"). Aqueducts were used by the Ancient Greeks, Ancient Egyptians, and Romans.