Aquaria (アクエリア, Akueria?) is a town from Final Fantasy Mystic Quest located in the Northeast quadrant of the World Map.

Aquaria is the hometown of Phoebe and lies southeast of the Ice Pyramid alongside a lake fed by the northern waterfall. Due to the Crystal of Water having its power drained, the town's water supply is frozen and plants cannot grow. The town is restored to normal once the Ice Golem is defeated. Phoebe's grandfather Spencer is digging a tunnel underneath the town.

Later in the game, Benjamin recruits Kaeli here, and suggests Spencer dig down to rescue Captain Mac from the cliffs, but he runs off with Tristam. Phoebe bombed the tunnel, but this caused it to collapse. Reuben and Benjamin later used Otto's Rainbow Bridge Machine to cross to the outside of the tunnel and blast through that way, completing the tunnel and draining the water above into the dry lake.

The sellers are located within the Inn.

A piece of armor can be bought at the house in the northwest corner of Aquaria. 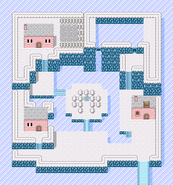 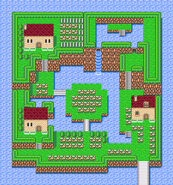 Aquaria is the plural form of "Aquarium".