Minedi Sakamoto
The Aqua Maiden is a water-elemental Eidolon from Final Fantasy Dimensions II. She can be obtained as a signet for Jornee to equip as a first-time completion reward for the "Adoring Elves" side quest in the Present Shivask Plains.

The Aqua Maiden signet provides a moderate boost to Jornee's HP, MP, and magic stats. She teaches Jornee her strongest healing ability, Healara. Due to the spell being a party-wide heal, it is highly advisable for the player to obtain the Aqua Maiden when it becomes available to unlock. However, she is easily outclassed as the player progresses through the game and obtains stronger signets.

In the original free-to-play versions of the game, the Aqua Maiden was a water-elemental signet that could only be obtained once the player obtained the necessary amount of Mog Coins in the "Ghost's of Light and Darkness" event in Final Fantasy Legends: Toki no Suishō. However, she taught the Eternal Water ability instead of the Healara ability. In the premium versions of the game, the Aqua Maiden's Eternal Water ability was removed from the game and replaced with the Healara ability. The Aqua Maiden summon was an SS+ rank signet and could be equipped by any party member.

According to the official description from the free-to-play versions, the Aqua Maiden is based on the character Aria Benett from Final Fantasy III. In her artworks, the Aqua Maiden is depicted in an elegant gown and wears a veil upon her head. Her final artwork's color scheme heavily borrows from Aria's appearance in her original game.

Her abilities contain references to both Aria and her original game, with her Water Crystal summon attack serving as a reference to Aria helping the party restore the Water Crystal in Final Fantasy III. In addition, the Aqua Maiden allowed the wielder to use the Eternal Water (悠久の水, Yūkyū no Mizu?) ability in the original free-to-play versions, which is a reference to the main theme of Final Fantasy III, Eternal Wind (悠久の風, Yūkyū no Kaze?).

The following are the abilities Jornee can learn from the Aqua Maiden: 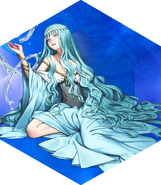 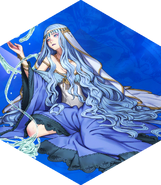 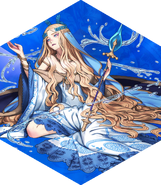