Engulfs enemies in a stream of bubbles, dealing both wind and water damage.

Aqua Breath (アクアブレス, Akua Buresu?), also known as Aqua Rake, AquaRake, or Aqualung, is a recurring Blue Magic spell from the Final Fantasy series. It will usually deal water-elemental damage to all enemies for a large sum of MP.

Aqua Breath (also known as Aqua Rake) is a Blue Magic spell that deals non-elemental damage to all enemies. It also deals 8x damage to desert monsters. It is powerful enough to kill Sandworm in a single hit, and Landcrawler in three. A Blue Mage may learn Aqua Breath from the Dhorme Chimera, Manticore, Leviathan, Bahamut, Azulmagia, Water Crystal, Enuo, Gogo, and Aquagel enemies. It costs 38 MP to cast.

The player may utilize this ability by catching and releasing a Dhorme Chimera, Moogle Eater, Rajiformes, or Aquagel.

Aqua Breath (also called Aqua Rake) is one of Strago's initial Lores. It deals Wind-elemental damage in addition to Water damage. It hits all targets, costs 22 MP to cast and has a power of 71 and hit rate of 150. It is one of Strago's most powerful and useful spells, as it hits hard and is MP-efficient.

Aqualung is an ability used by a number of enemies. It is a Water elemental ability that inflicts major magic damage to all enemies. It is first used by the Harpy in the desert in the Gold Saucer Area, and can be fatal for an unprepared party. It is also used by the Jenova∙LIFE boss at Forgotten City, and the Serpent on the Sunken Gelnika.

Since it is Water-elemental, Aqualung can be resisted, nullified, or absorbed with the right set up, and it can be sent back in the direction of the caster if the intended targets have the Reflect. Aqualung's spell power is equal to 3.25x the base magic damage.

Aqualung can be learned as an Enemy Skill. It costs 34 MP to cast. If the entire party has the Reflect status, it can be cast on the party to reflect onto the enemy party a total of three times. This, along with the fact that few enemies have Water resistance, makes this Enemy Skill very effective against bosses and strong enemies.

Its magic power differs depending on the Crisis Level:

Aqua Breath is an ability used by Axolotl and Quale. It has a 50% hit rate and often misses, and costs 14 MP to use. It can't be reflected and works with Return Magic. Aqua Breath deals damage equal to 1/4 of the target's Max HP (or 1/2 with Elem-Atk boost equipment), making it a Gravity type spell, which also means it never works on most bosses.

Quina can learn Aqua Breath as a Blue Magic from the Sahagin, Axolotl, and green Vepal.

Kimahri Ronso can learn Aqua Breath from the Chimera, Chimera Brain and Yenke Ronso for his Ronso Rage Overdrive. It deals Water-elemental damage to all enemies.

Aqua Breath is an enemy ability used by Rhyos. It deals heavy Water-elemental damage to the party.

Aqua Breath is a enemy breath ability that deals Water damage to enemies within a fan-shaped area. It is used by Adamantoise family.

Aqua Breath is an enemy ability used by Leviathan in both of his boss encounters. When used, Leviathan will unleash a small area of effect water spell on the active tank.

In addition, Ultros uses his own version of Aqua Breath when fought in the Dragon's Neck. When used, Ultros will deal damage to all party members in front of him in cone shaped area of effect and will inflict the targets with the "Wet Plate" status.

Aqua Breath is also a spell obtainable by Blue Mages, learned from either Leviathan in either version of the Whorleater or Ultros in the Dragon's Neck. It inflicts the Dropsy status to all targets in range, dealing water damage over time. The spell has a 2-second cast time and hits a 8-yalm cone in front of the caster.

Deals water damage to all enemies.

Aqua Breath is a Fusion Ability that deals water-based damage to all enemies. It is exclusive to Warriors of Light and costs 22 MP to cast. Aqua Breath requires the character to have Black Mage's Blizzara and Dragoon's Blizzard Breath mastered.

Aqua Breath is used by Forfex. Blue Mages can learn this skill by killing an enemy who has used it in the presence of the Blue Mage. As a Blue Magic, Aqua Breath is a water-elemental magic costing 190 AP to cast, has a cooldown time of eight seconds and a power of 35. Three large bubbles are spread randomly in approximately a 140° arc in front of the caster. After traveling a short distance, the bubbles remain stationary. The bubbles will burst after a few seconds. Getting close to an enemy is recommended to ensure that all three bubbles hit the target. 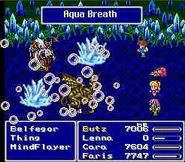 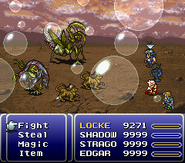 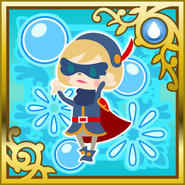 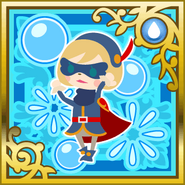 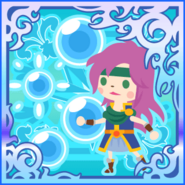 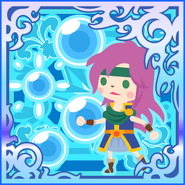 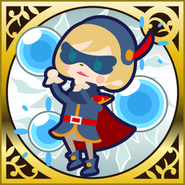 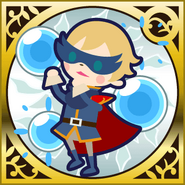 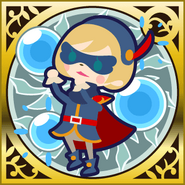 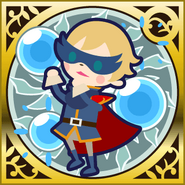 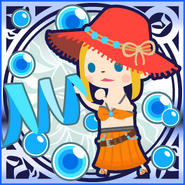 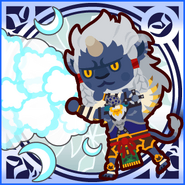 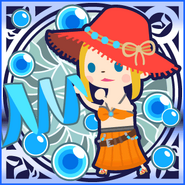 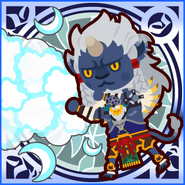 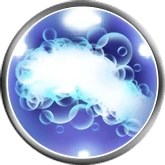 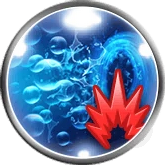