Aps, is a boss in Final Fantasy VII. It is the first "non-robotic" boss faced in the game. Tifa, Cloud, and Aeris encounter it in the Midgar sewers. It is one of the monstrous pets of Don Corneo, and resides in the sewers directly below his mansion.

-Abilities whose names are not shown when used are highlighted in italics.
-The party cannot escape.
-There are two different attacks called Sewer Tsunami.

Nothing
Phoenix Down (100%)
Nothing

It is possible to get a pre-emptive attack on Aps, unlike against most other bosses. Attacks to the back of Aps inflict quadruple damage, as opposed to the regular double for the majority of enemies. Aps is weak to Fire.

Sewer Tsunami is Aps's strongest attack, but it damages Aps as well. The tsunami can come either forward, which causes more damage to Aps (between 180-192 HP) than the party, or backward of party, which causes more damage to the party than Aps (between 45-48 HP). It is used at certain points in the battle, as well after being hit by a magic attack. Aps's Lick attack inflicts Sadness, which reduces damage taken but halves the speed party's Limit gauges fill.

Aeris should concentrate on casting Fire and healing. Cloud's Cross-slash Limit Break often paralyzes Aps for most of the fight. If Aps is paralyzed, it will not counterattack with Sewer Tsunami.

Use Sewer Tsunami*(Forward version) on all targets

Else: Use Tail Attack on random opponent

Else: Use Lick on random opponent

Use Sewer Tsunami*(Forward version) on all targets

Use Sewer Tsunami*(Backward version) on all targets

Counter - if attacked by magic 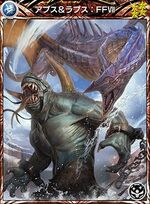 Aps has a tattoo similar to Don Corneo's in its artwork, which is absent from its in-game model: a heart with a sword through it, bordered with the text "Colneo's[sic] Pet No. 002 (too small to read)", "son of a bitch", and "kill".

Aps could be an alternative pet name for Apanda. Aps shares a resemblance and elemental properties with the boss from Final Fantasy V.

Aps's artwork specifically confirms its named after the Mesopotamian God. (アプス（メソポタミアの神様の名前です), Apusu (Mesopotamia no kamisama no namae desu)?, lit. Abzu (it is the name of a Mesopatamian God))