Harp immersed in the power of the sun.

Apollo Harp (アポロンのハープ, Aporon no Haapu?), also known as Apollo's Harp and Apolon Harp, is a recurring weapon in the series. It is often one of the strongest harps and is often the best weapon for the Bard job class.

The Apollo Harp is the strongest harp, and can only be used by Bards and Onion Knights. It provides 60 Attack and +10 Mind, and inflicts Silence. It can be bought for 60,000 gil in Eureka. The Bard will use the Elegy song which casts Shell on the entire party.

Apollo's Harp is the weakest of the three harps introduce in the Advance and The Complete Collection. These weapons are exclusive for Edward. Apollo's Harp is only found in the Cave of Trials. It provides 98 Attack, 40 Accuracy, as well as +15 Strength, Spirit, and Agility, and is Fire-elemental. It also deals extra damage when used against dragons. It is guarded by the Gigas Worm.

The Apollo's Harp is a harp that provides 60 Attack, 40% Accuracy, is Fire-elemental, +10 Strength, +10 Speed, +10 Spirit, +1% Magic Evasion, and is effective against dragons. and is still inferior to the Loki Harp. It can be found in the True Moon's Subterrane.

Harp effective against dragons and undead. Must be used two-handed. Full power from back row.

Apollo's Harp is the strongest harp for the Bard class, and is one of the 12 Sealed Weapons. It casts a spell of 75 base power when attacking, and does x8 damage to undead and dragons, making it an effective weapon against Shinryu. For goblin punch purposes, it has an menu battle power of 45.

The Apollo's Harp is the strongest harp with an attack and magic attack of 17. It can be randomly found in the chest on the 90F inside Moonsand Ruins, Holy Tree Tower, Mysterious Lighthouse, and Trial Tower.

Apollo's Harp is a weapon with 75 Attack, adds 20 Accuracy onto the character's original Accuracy, and it costs 25700 gil to purchase. It also ignores rows and may cause Paralyze on the target.

This elegant harp produces sounds so beautiful they hurt--literally.

Apollo Harp grants +15 to Attack. It can be equipped by Geomancer, Bard, Moogle, and Pig.

A harp said to have been owned by an old god. The harp lets out a beautiful tune with a single strum that could captivate anyone who hears it. The music from it could even captivate fairies who would overflow their eyes with tears. This particular harp of legend is known by even the lowliest of bards, and is sought by many, who dream of strumming its strings, even to the extent of risking their lives.

Apollo Harp is an Instrument obtained by defeating Erinyes in the Farplane. It provides 34 ATK, 110 MAG, 30 SPR, +75% physical and magic damage against dragons, +70% accuracy, has a damage range of 130-170%, requires both hands to wield, and gives access to the ability Hero's Rime. 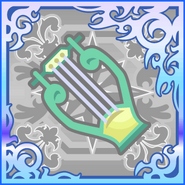 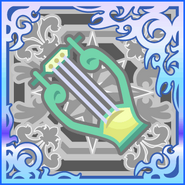 [view · edit · purge]Apollo is one of the most important and complex of the Olympian deities in ancient Greek mythology. Apollo has been variously recognized as a god of light and the sun, truth and prophecy, healing, plague, music, poetry, and more.

[view · edit · purge]There are two versions of harp creation in Greek mythology: Apollo created the harp when he discovered that the sound of his bowstring could heal physical wounds and soothe souls. Another story claims Hermes created the harp by stringing a tortoise shell and giving it to Apollo as a gift. The instrument became a common attribute of Apollo.