Spell Power: 120
Apocalypse is an attack magic spell in Final Fantasy VIII. It is the most powerful non-elemental spell in the game, damaging all enemies, but is only obtained during the final battle; though Apocalypse has junction stats, the part where it is obtained is past menu access, and thus it is impossible to junction Apocalypse to stats in a normal playthrough. These junction effects are generally second only to Ultima's.

The final boss repeatedly uses Apocalypse against the party.

Apocalypse is drawn from the final boss's lower half. It is not immediately available; the player needs to wait for the final boss to draw it first, and then target the same body part with Draw.

Apocalypse has a spell power of 120, meaning its damage is calculated as: 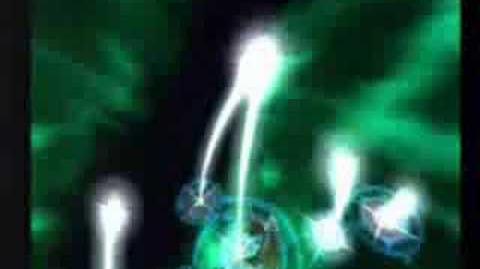 After drawing the spell, the player can then cast it with the Magic command, or with Rinoa's Angel Wing if she has it in her inventory. It can be especially potent when used with Triple.

The version of the spell cast by the final boss is a variation with a spell power of 200.