Puppetmaster
Aphmau is the Royal Puppetmaster for the Empress of Aht Urhgan, although there is more to her than meets the eye. She is a key character in the Final Fantasy XI expansion Treasures of Aht Urhgan.

Aphmau is a fifteen-year-old Hume girl with blue eyes and braided blonde hair. She has two similar outfits, a white one and a red one. The former is worn inside the palace, while the latter is worn outside. Both consist of a short embroidered jacket, Oriental trousers, an ornate belt, and shoes with pointed, upturned toes. The main difference is that the red outfit includes a laced undershirt, while the white outfit includes a black top that exposes her stomach. Both outfits may be based on the concept of a thobe, a traditional garment worn by women in Arab-influenced regions such as Palestine[note 1].

At first, Aphmau appears shy and withdrawn, often letting her Automatons speak for her. However, her real personality is upbeat, friendly and caring, as demonstrated by her devotion to her Automatons, her brother and Luzaf.

While she acts as the timid court Puppetmaster of Aht Urhgan, Aphmau is the Empress Nashmeira. Thanks to her mother's discoveries in Automaton technology, she can control two Automatons at once, Mnejing and Ovjang, even though only Ovjang is actually hers. The Aphmau persona is a necessary cover, devised to protect Nashmeira, as she is still very young. It also allows her to participate personally in the affairs of her kingdom without compromising her identity.

Two hundred years prior to Nashmeira's time, Aht Urhgan invaded the neighboring Kingdom of Ephramad. While the conquest was successful, the surviving Ephramadians formed a resistance fleet, led by Prince Luzaf. This movement was eventually crushed, but not before a dying Luzaf formed a pact with Odin, vowing to destroy Aht Urhgan. When Razfahd decides to reawaken Alexander, Odin senses his imminent return and, as the two deities are destined to clash, reawakens Luzaf to serve as his vessel.

Rumors of Luzaf's ship, the Black Coffin, being sighted spark Nashmeira's curiosity, and she investigates the matter under the guise of Aphmau. Luzaf kidnaps Ovjang, intent on studying its mechanisms in case they could be useful to his ends. Nashmeira and Mnejing attempt to rescue the Automaton by following Luzaf onto his ship, but end up as captives themselves.

Appreciative of the young woman's courage and spirit, and believing her to be a simple Puppetmaster, Luzaf explains his plans to her, as well as how Razfahd's attempts to reawaken Alexander are bound to lead to Aht Urhgan's destruction. She finds this difficult to believe and argues that the current people of Aht Urhgan are innocent of what was done to Ephramad, and wreaking revenge against them makes no sense.

When Razfahd scours the Arrapago Islands to find her, she asks Luzaf to confront him and demands answers. He confirms her fears and explains that he deems her too young and naïve to be a good ruler. This also reveals her identity to Luzaf, who summons Odin, seeing a perfect opportunity to wipe out the entire ruling family of Aht Urhgan. He changes his mind and prevents the deity from fully manifesting, the strain making him lose consciousness. Nashmeira rushes to his help and returns to the Black Coffin with him.

When Luzaf regains consciousness, he finds himself agreeing with Nashmeira's viewpoint. She says that he should attempt to rebuild Ephramad rather than destroy Aht Urhgan, but he fears that Odin will not accept his change of heart. She urges him to try to break his pact with the deity, and they travel to the Hazhalm Testing Grounds to confront him. Odin refuses to even hear Luzaf out and states that he will become his host, whether he is willing or not. Luzaf tells Nashmeira that they should destroy the Automaton body Razfahd is constructing for Alexander to prevent a second Ragnarok from occurring.

Having tracked the pair down, Razfahd arrives with a squad of Immortals to capture Luzaf. He states that Nashmeira has betrayed her country by consorting with him and therefore no longer has any authority, but lets her escape while he takes Luzaf into custody. He then proceeds with his plan to revive Alexander, dismantling Mnejing and Ovjang to complete his Automaton.

Nashmeira instructs her mercenary (the player character) to rescue Luzaf, while she attempts to reason with her brother, who has traveled to Nyzul Isle (the ruins of Alexander's previous body) to set his plans in motion. Her efforts prove to no avail, and Razfahd takes control of the Automaton, thinking that this will also allow him to control Alexander. The deity is too powerful, and Razfahd is overwhelmed. Knowing that it is partly based on Mnejing and Ovjang's mechanisms, Nashmeira attempts to gain control of the Automaton, but this backfires, and Alexander ends up killing her. This enrages Luzaf, who has arrived on the scene after being freed by the mercenary, and he bids Odin to manifest.

Razfahd restrains Alexander with a dying effort, realizing that letting him duel Odin would destroy Aht Urhgan. In return, Luzaf restrains Odin and offers him his life in return for Nashmeira's. His prayer is granted, and Nashmeira is brought back for a final goodbye before Luzaf fades away. This experience allows her to find the courage to be the Empress that Aht Urhgan needs, and she is formally re-crowned in celebration of Alexander's defeat.

After Odin and Alexander are defeated, astral gates are left at the locations of their respective manifestations (Nyzul Isle and the Hazhalm Testing Grounds). Nashmeira and Ghatsad, the Imperial Puppet Engineer, are understandably anxious to find a way to close these gates, so that the deities are no longer able to enter Vana'diel and reenact their struggle. They send the mercenary to investigate both locations. Nashmeira hints that, if at all possible, she would like the mercenary to find a way to free Luzaf's soul from Odin's control (she does not state this directly, but Mnejing and Ovjang spell it out later).

This may be achieved after battling Odin 13 times if the mercenary agrees to take Luzaf's place as Odin's future vessel. Luzaf then appears to express his gratitude. He asks why he has been freed, to which the mercenary may respond that it was a personal request from the Empress. Luzaf comments that Aht Urhgan and Nashmeira (whom he still refers to as Aphmau) are in good hands, and that he will watch over them for eternity. 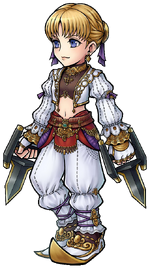 Aphmau appears as a playable character.

This simple and innocent-seeming girl serves as the Royal Puppetmaster for the Empress of Aht Urhgan. But her behavior before the Grand Vizier and her habit of sneaking off in secret suggest there is something more to her...

Aphmau appears as an unlockable character, and is unlocked by collecting White Crystal Shards. Her automaton Ovjang follows and attacks for her in a Field Music Sequence and Battle Music Sequence respectively.

She is a Support oriented character. 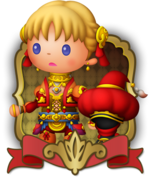 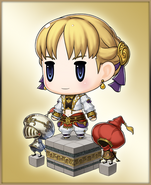 Aphmau is a playable character who could be initially recruited during the Challenge Event The Shadow Stirs as a First Time Reward for completing the event's Delkfutt's Tower stage on Classic difficulty. 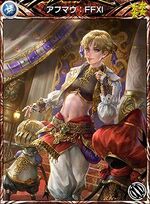 Aphmau came in sixth place in a Final Fantasy XI NPC Popularity Contest held by Square Enix in June 2013. Current players of the game were given an opportunity to vote for their favorite NPC and share ideas for stories involving these characters.

YouTuber Jessica Bravura is better known by her alias which she got from this character. 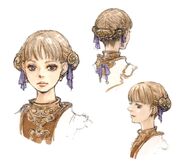