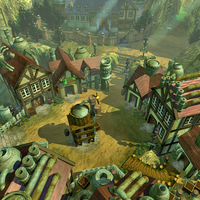 "Anxiety" first appears in Sector 8 after the explosion of the Mako Reactor 1. It is the background theme for the Train Graveyard, Nibelheim and Gongaga, as well as Kalm after Meteor is summoned. It is the fourth track of the Final Fantasy VII: Original Soundtrack first disc.

"Anxiety - FFVII ACC Version" is an arrangement of "Anxiety" by Keiji Kawamori. It plays as Cloud passes out next to Tifa in the Sector 5 slums church in Advent Children Complete and replaces the track "Water", which played during that scene in the original release. It is the fifth track from Final Fantasy VII: Advent Children Complete Reunion Tracks.

"The Shrouded Village (from FFVII "Heart of Anxiety")"

"The Shrouded Village (from FFVII "Heart of Anxiety")" is an arrangement of "Anxiety" by Takeharu Ishimoto and is the background theme of Nibelheim. It appears as the fifth track on disc two of the game's original soundtrack.