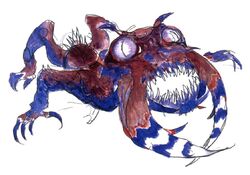 There's nothing to fear. Antlions are quite docile. They won't harm humans.

The Antlion is found around the large desert in Palamecia. Despite its English name, it doesn't share the same Japanese name as the rest of the entries, and thus may not be part of the same family. It has a powerful physical attack that can cause Paralysis, along with an elemental weakness to Ice and Poison.

The Antlion dwells within the Antlion's Den near Damcyan Castle. The secretion it produces when laying eggs can become a Sand Pearl. Cecil, Edward, and Rydia venture into the cave to obtain a Sand Pearl to heal Rosa from her desert fever. They reach the Antlion's nest, seemingly without any trouble, because the Antlion is usually docile and doesn't attack people. However, it attacks the party due to the influence that is making monsters aggressive, and they have to fight it.

Main article: Antlion (The After Years)

The Antlion is an optional boss fought in the Crystals Tale in Damcyan Castle. These docile creatures overrun Damcyan because of the effects of the True Moon.

While riding Boko in the merged world, Bartz and Krile fall into an Antlion (also known as Antolyon) pit. After defeating it, Faris helps them climb out.

The Antlion appears near the beginning of Episode 1 when Linaly and Hassam travel through the desert on the way to the Wind Shrine. The monster chases the two, who attempt to escape by chocobo, and almost kill them when Prettz comes to the rescue on his motorbike. He slices its head off, killing the Antlion and saving Linaly and Hassam.

The Antlion is a boss in a sand vortex near Cleyra and lures its prey into its grip. It captures Prince Puck when the Alexandrian army attacks Cleyra. Antlions are also fought later if the party attempts to enter the Desert Palace through the wrong sand pits.

Antlions are a family of creatures of the insect order found in some zones that were added by the expansion Final Fantasy XI: Chains of Promathia. Generally Antlions are not aggressive. There are also jugs that can be used by Beastmasters that summon Antlions as pets. 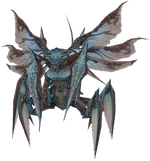 The Antlion is a mark in the Lhusu Mines. It made its den deep in the mines, where some local children had gotten lost. Additionally, after the battle with Air Cutter Remora, "Tonberry" communicates with "Antlion", who instructs him to withdraw.

The Antlion is a common enemy, a non-elemental melee-type of Rank II. There also exists a red-colored Antlion, called the Antlion Queen, as a unique enemy.

An Antlion appears in the Lynari Desert as the stage boss, aided by a variety of Scorpions. It lives in a sandpit.

Antlions and the stronger Jawbreaker are regular enemies.

Antlions are associated with the element of Earth, and have another variant, the Pit Beast. They also have the slightly disturbing abilities to Cannibalize an ally unit and spew bodily fluids to cause debuffs.

Antlions appear as basic, weak enemies and are usually one of the first waves sent.

The Ant Lion is an enemy and also a possible monster that the party's monster unit(s) can transform into. It can be found on the eleventh floor of the Tower.

The Ant Lion is an enemy and also a possible monster that the party's monster unit(s) can transform into.

Antlion is an enemy family.

In Kingdom Hearts 358/2 Days, the Antlion appears as a Heartless boss in Agrabah that Roxas battles. It has a bug-like appearance, and is able to both burrow underground and create sandy whirlwinds.