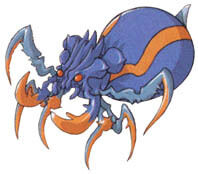 Giant bug with needle-like legs and a powerful jaw.

The Antlion is a blue insect in Final Fantasy Tactics Advance, and unlike some previous games, a common enemy rather a boss. It makes use of its strong mandibles and affinity with sand to damage party members. It has a stronger relative called Jawbreakers.

The Antlion's other ability, Sandstorm, is usable by Morphers since they are capturable. Morphers can use Antlion abilities with Jawbreaker abilities if the player has one. Sandstorm provides damage while also blinding enemies, severely decreasing the accuracy on all of their attacks. Sandstorm's damage output can always be increased by feeding the monster.

Antlion appears on an earth-elemental card.