Detects by Sound
Hidden (Pit Antlion)
List of Antlion Enemies
Antlion is a genus of enemies in Final Fantasy XI.

Antlions are notorious among explorers and adventurers for their startling habit of burrowing under cracks in the ground, and springing out of them when something walks past above. Their large mandibles are not their only weapon, as they also have a potent venom. 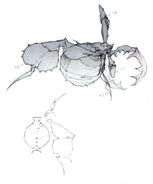 Antlion concept art.
Add a photo to this gallery

This section about an enemy in Final Fantasy XI is empty or needs to be expanded. You can help the Final Fantasy Wiki by expanding it.
Final Fantasy XI enemies
Retrieved from "https://finalfantasy.fandom.com/wiki/Antlion_(Final_Fantasy_XI)?oldid=3239574"
Community content is available under CC-BY-SA unless otherwise noted.