Issued to wilderness patrons, these weapons are well-suited to team-based attack strategies.

Antares (アンタレス, Antaresu?) is a recurring weapon in the series. It is generally a powerful gun.

The Antares is a high-ranked gun that provides 39 Attack and 5% critical rate. Guns are the slowest weapons apart from Wyrmhero Blade, at 4.2s charge, and 1.4s action time. It can be bought in the Balfonheim Port for 16,000 gil and requires 80 LP and the Guns 5 License to equip.

In the Zodiac versions, it now provides 41 Attack, 10 Evade, 50 CT, 5% critical rate, and requires the Guns 5 license for 90 LP. It can be found as a treasure in Cerobi Steppe (Old Elanise Road) and Pharos - Third Ascent (Spire Ravel - 1st Flight), or dropped by Deidar (3% chance). It can be equipped by the Machinist and Shikari.

The Antares Deluxes is a pair of guns for Sazh. It gives the passive ability Chain Bonus Boost, and belongs to the Boost Synthesis Ability group. It can be bought it plautus' workshop, or found in Eden.

The Antares Needles are a pair of weapons for Rogues. They are a potential treasure from Graffias, the final boss of the Thousand Maws of Toto-Rak. They are named after Antares, a boss who appeared in the original version of Toto-Rak. 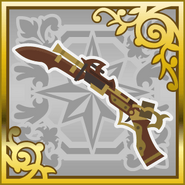 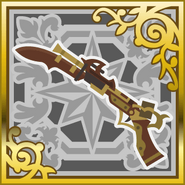 [view · edit · purge]Antares is another name of the star Alpha Scorpii located in the constellation Scorpio, named from Greek meaning "against Ares" due to its red coloration similar to the planet Mars. In the religion of Stregheria and in some translations of the Book of Enoch, Antares is a fallen angel.