Though the fur of the feral croc might seem, at first, to grow in a random fashion, the careful observer will note channels in the fur which permit air to pass and cool the beast. Typically, air flows freely over the creature's body before continuing on its way, yet on rare occasions it leaves the channels, swirling instead around the nooks and crannies of the croc's strange physiology. There the wind takes on tangible form, and so is the substance known as the antarctic wind formed.

The Antarctic Wind (南極の風, Nankyoku no Kaze?), also known as South Wind, is a recurring, single-use item in the Final Fantasy series that frequently is used to cause some form of ice damage to one or more targets. Its upgrade is generally the Arctic Wind.

A stone with the same effect as Blizzard.

Stone with the same effect as Blizzard

Antarctic Wind cast Blizzard to a target several shops sell them in individual tales, along with other attack items.

Uses "Ice2" on all opponents

The North Wind is a Guardian Force-affinity boost item. It can also be used for refining.

Four can be used to customize Icestrike to a weapon.

The Antarctic Wind is a Throwing weapon dropped from Suzaku, with a special use: if it is thrown at Genbu, it disables his additional water damage on melee attacks, making it easier on the tank. The Arctic Wind serves an inverse function.

A cold wind swirls in endless circles inside this perfect sphere. Merely touching it with your bare hands sends a penetrating chill through your bones.

The Antarctic Wind is loot acquired from Feral Croc and Gavial. Two may be sold to unlock the "Permafrost Bow and Quiver" at the Bazaar.

The Antarctic Wind can be bought for 300 G in Guera, Urbeth, and Invidia, won from Silky and Wight, or found in Guera, Invidia, and Spelvia. Due to the elemental system used, the item inflicts water-elemental damage instead of the traditional ice-elemental damage.

Antarctic Wind is an item used during Battle Music Sequence. It activates when a monster's HP reaches 33%, and inflicts medium damage. It is obtained randomly after completing a Music Stage.

Antarctic Wind is an item that can be used during Battle Music Sequences. It is activated when an enemy's HP dips below 1/3 to cause some damage and has medium strength. It can be obtained randomly after completing a Music Stage.

A mystical item with the chill winds of the southern reaches sealed within. Even brought far from its source, it carries enough power to deal a small amount of ice damage. An effective way for those not magically inclined to stand against fire-element foes, even its modest powers can help give and edge in battle.

Antarctic Wind is an item that casts the Blizzaga spell, and can be found in Guardian of the Water and Chocobo's Memories.

An ice crystal that never melts. It is found in the Antarctic, where it is said to form when Luxendarc enters an ice age. Raising it up and chanting causes a fierce, cold wind to shoot forth.

Antarctic Winds deal 500 damage to the targeted party. It can be bought from the Adventurer (Norende Village Combat Item Shop Lv. 2) for 200 pg, found in Yulyana Woods Needleworks, Grandship, and Engine Room, or dropped and stolen from Orthros (ch 1, 5, 6, 7, 8; blue head). 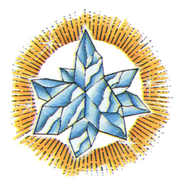 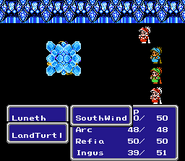 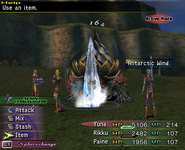 A south wind is a wind that originates in the south and blows north. In the Southern Hemisphere, especially in southern Australia, the north wind is a hot wind which often leads to bushfires.