Annika Svennson's Trust Master reward is the passive special ability Distraction which increases HP by 20% and enables the use of Firestarter.

Annika Svennson is a 3-5★ limited-Time Summon, whose job is listed as Mercenary, and her role is Physical Attacker. She has no innate element or status ailment resistances.

Annika Svennson's stats at her highest levels are as follows (with no passive abilities taken into account), along with the maximum amount of stat points that can be increased through pot-enhancements:

She can equip the following armor types: hats, clothes and light armor. 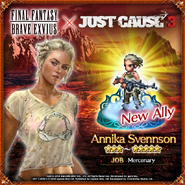 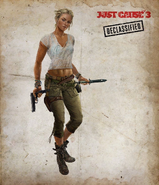 Artwork from Just Cause 3.