Anima is an aeon from the Final Fantasy X series. Her signature attack is Oblivion, which obliterates opponents with multiple strikes. She represents darkness and death, although Dark is not an element in Final Fantasy X.

Anima is a towering two-part creature whose top half is heavily restrained. The lower half is a horned demon. A picture of her fayth hangs from her neck, portrayed with a glowing halo like a saint. In the original version, Dark Anima doesn't have the picture of her fayth, but in the HD Remaster version, she does.

The symbol for Anima and Baaj is annotated with the kanji for darkness, (闇, yami?). It appears in the middle of Anima's seal that also blocks the player's path to the Baaj Chamber of the Fayth until they meet all the prerequisites for unlocking it. Treasure chests can be found in recesses opened by Destruction Spheres in the various Cloisters of Trials. When Tidus opens these chests, the symbol of Anima's seal appears; a clue that finding these chests will open the way past the barrier in Baaj. The glyph also appears at the end of Anima's Overdrive.

Anima appears in Luca when Maester Seymour summons her to rid the area of fiends that appear during the blitzball final. Yuna is in awe of the aeon's power, which is exactly what Seymour wanted. He later summons Anima against Yuna's party when they confront him in Macalania Temple.

Like all aeons, Anima is the physical manifestation of a dream of a specific fayth—in this case, Seymour's mother, whose real name remains unidentified. She may or may not be named Anima herself; Yojimbo's name is the same as his fayth, but Jecht's aeon form is named after the summoner who called him to defeat Sin. Other than Jecht, Anima is the only fayth to have significant details about her origin and past revealed.

A vision is shown by pyreflies as the party travels through Zanarkand ruins depicting Seymour's mother bringing Seymour to meet Yunalesca. Seymour's mother had intended to become the Final Aeon for him to use and defeat Sin, but Seymour never fought Sin with Anima, instead bringing her fayth to the abandoned Baaj temple and sealing it up. It appears Seymour's mother was acting against her son's wishes in becoming a fayth, as Seymour is reluctant to go through with the plan in the vision the party views, not wanting to lose his mother.

When Yuna and her guardians visit the ruins of Baaj they are greeted by Seymour's mother's fayth, who tells the story of Seymour's past and offers Anima's services to Yuna to help her destroy Sin. She holds no ill will towards her son; rather, she blames herself for failing to prepare him for the challenges that would face him as a summoner and a half-human living among the Guado. Feeling responsible for Seymour's downfall, she views her service to Yuna as her last opportunity to atone, to "destroy Sin and her son's obsession with it". If Tidus returns to Baaj Temple's Chamber of the Fayth, Anima's fayth does not sing the "Hymn of the Fayth".

Anima's fayth tries to stop Shuyin's apocalyptic plan, but she, like the others, ends up possessed by his hatred. Anima is the final aeon Yuna, Rikku and Paine face in a battle on their way to the Farplane.

To receive Anima as an aeon, the player must have received all of the treasures hidden within each Cloister of Trials. The items are accessed with Destruction Spheres. If the player did not get them the first time through the trials, they can return later, but in the later versions two of the Destruction Sphere chests are guarded by the Dark Aeon superbosses after the party's escape from Bevelle: Dark Valefor at the entrance to Besaid Village and Dark Shiva at the entrance to the Macalania Temple. The Zanarkand Dome is guarded by Dark Bahamut, but he is located after the Cloister of Trials and therefore the player does not need to fight him to obtain the treasure.

At Baaj temple, the player must fight Geosgaeno (the first boss Tidus faces when he comes to Spira) to gain entrance to a sealed underwater room. The antechamber has a puzzle that displays the aeons' glyphs. A pattern corresponding to each aeon lights up behind each of the statues once a Destruction Sphere has been used in the corresponding temple to open a hidden treasure chest. Each Destruction Sphere has an elemental sign, and the matching aeon's summoning glyph lights up behind the statue when it is used on a pedestal in Baaj.

After unlocking the seal, the player can view a cutscene and Yuna harnesses Anima's power. Although obtaining Anima as one of Yuna's aeons is optional in gameplay terms, her appearance in the ending FMV indicates that doing so is canon. 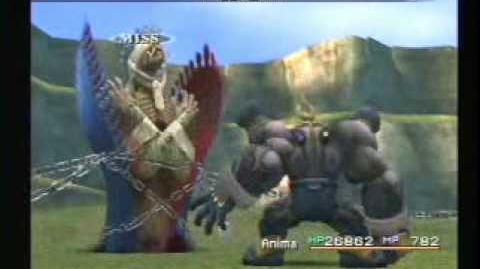 Anima is called from an underworld: a portal opens in the sky from which a chain falls into and through the ground. The chain rises and pulls Anima up, revealing her further chain-bound form. Upon her first summoning, Yuna usually says "I will share your pain with you."

Anima's Overdrive is even more extravagant than her entrance. She opens a gateway into her world beneath the enemy party, sinking them. The world shifts to a crimson-red dimension where an even darker form of Anima shatters the chains binding her fists and unleashes a devastating sixteen-hit combo to each enemy that can inflict a grand total of 1,599,984 damage in the PAL, International, and HD Remaster versions, as each hit can deal up to 99,999 damage. In the original Japanese and North American version, Oblivion cannot exceed 99,999 damage.

If the player has the game set to display the short summon sequence, Oblivion will only hit once and the player will see the total damage at the end effected as one hit.

Anima is an aeon that deals immense damage, one reason being the fact she can break the damage limit from the start. Pain, her special attack, is an instant kill, which also deals colossal damage to enemies immune to death spells. It ignores defense and is actually more effective than her Overdrive, Oblivion, versus some stronger enemies like Dark Bahamut. Pain is a magical attack, but due to the high power and ignoring defense, it is likely to hit for maximum damage against any enemy not fully immune to magic.

Anima is arguably the strongest aeon as her attacks and Overdrive deal nearly 99,999 damage upon receiving her (if the player has been improving Yuna stats). In raw numbers, only Sandy (one of the Magus Sisters) is stronger than Anima.

Her victory pose is to silently roar while looking up.

Anima’s dismiss animation is unique. Unlike other aeons, she cannot move from her spot, and simply vanishes into shadow.

Anima's stats depend on the number of battles fought and Yuna's stats.

Aeons also have "equipment" with auto-abilities, though it is not visible in-game. Anima has Piercing and Break Damage Limit in her weapon, and Sensor, Break HP Limit and Break MP Limit in her armor.

Anima is fought as a boss summoned in Macalania Temple, and during the final battles if Yuna has obtained her as an aeon. A dark version of Anima is fought as an optional superboss on Mt. Gagazet in the International, PAL and HD Remaster versions.

Anima is a boss fought on the road to the Farplane.

Anima makes an appearance in the Final Fantasy XIV: Endwalker expansion, serving as the final boss for the

The Tower of Babil. Unlike the original version, this incarnation of Anima is male. He is a primal born from the corpse of the deceased emperor Varis zos Galvus and the prayers of Garlemald's citizens to return to their former glory. The towers spread across the world act as extensions of himself powered by pieces of Varis' body, and can temper anyone who approaches to be loyal to the Garlean Empire.

Anima appears as a dark-elemental Eidolon. She can be obtained as a signet for Jornee to equip and teaches her Darkra abilities.

While not physically appearing, Yuna can summon Anima's Glyph to use Pain.

This cursed aeon is horrible to look upon and possesses terrible power. The chains that bind her body do little to check the destruction she is capable of. If she goes into a rage, you will share her great pain...

Anima appears as an enemy during Battle Music Sequences.

Anima appears as an enemy in Battle Music Sequences.

Anima appears as a boss.

Anima appears as a mini boss in the in game add-on Zanarkand. Anima's flavor text in All the Bravest states she "is indeed, the Final Aeon of Seymour. Let the debate be ended once and for all".

Anima is typically fought as a boss in the Record of Macalania Temple, as well as in select Final Fantasy X events where Macalania Temple is playable. She is often linked with Seymour's human form, also fought therein, but has been seen on her own.

Much will depend on how and where Anima is positioned on the event ladder as the battle begins. The party should prepare for an onslaught, as Anima tends to strike quickly and spreads her attacks over the group, many of which hit hard. Protectga and Shellga are a must, while Power Break[down] and Magic Break[down] will also help curb the damage. Anima's weaknesses are exposed as she prepares to charge Oblivion, so the party can use this short window to take advantage and strike back with its best DPS attacks. Yuna and/or Braska should be ready to heal or re-buff as needed; and as always, having a good Roaming Warrior never hurts, be it to buff the party or to knock Anima back to whence she came from.

Anima appears as an Esper.

Anima appears as an ability card and as an enemy summoned by Meia that can be fought during multiplayer mode.

Anima is one of Kaze's summons. It can be summoned by the Magun by using the following Soil Charge Triad:

Followed by saying: "Resonate! I summon you, ANIMA!"

Render of Anima's top half. 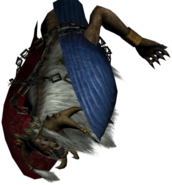 Render of Anima's bottom half. 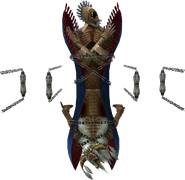 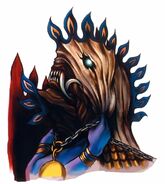 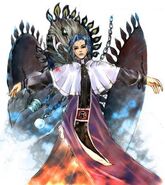