Anima is a boss in Final Fantasy X-2. She is an aeon fought on the road to the Farplane.

Oblivion, Pain
Nothing to learn

Anima can use Oblivion and Pain. Instead of being instant death like in Final Fantasy X, Pain this time inflicts non-elemental damage and various status effects; namely Silence, Darkness, and Itchy, as well as reductions of Strength, Defense, Magic, Magic Defense, Accuracy, and Evasion by 1 level each. Her standard physical attack inflicts Poison, while Oblivion does 16 hits of minor non-elemental damage against all characters.

It is best to protect the party by equipping Ribbons. Anima is weak against Holy, so a Warrior's Excalibur and Yuna's Trainer with Kogoro Holy, deal heavy damage. The Dark Knight's Darkness ability also works well, as does the Samurai's Fireworks. Another effective strategy is to use any special dressphere or powerful captured fiends (e.g. Black Elemental) to render the fight somewhat trivial.

Anima can be added to the Fiend Arena by capturing Aranea in Bevelle with an L pod in Chapter 5, raising him by four levels to complete his fiend tale, and then releasing him. The player needs to encounter and beat Aranea in battle in Via Infinito before this can occur.

Anima emerging from her glyph. 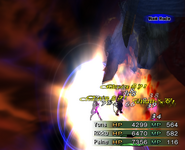