Angra Mainyu is a superboss in Final Fantasy X-2 found wandering Bikanel Desert during the excavation minigame. Angra Mainyu is a fiend the Cactuars of Cactuar Nation sealed away long ago, which was released after the Al Bhed began their excavation. In Chapter 5 it attacks the excavation camp and the Gullwings must fight it, but for this to happen they must find the Ten Cactuar Gatekeepers.

"A terrible fiend that has awakened from slumber beneath the desert sands. Bent on destroying all it encounters, it is a fiendish fiend indeed."

Angra Mainyu can be encountered before Chapter 5, flying around randomly during desert digs. Picket warns of unidentified object when it appears. It travels quickly and is invisible on the field, only appearing on the minimap. It can get stuck behind objects, such as the Hover.

The party can encounter it and steal items and gil and attack it, but it will always eject the party with Unnatural Selection, even if its HP were to be technically reduced to 0. It is still a useful encounter for the gil and items that can be stolen, and if the party attacks it, it will have less HP when attacked full on in Chapter 5, although Angra Mainyu still recovers its HP by a large amount. The arms cannot be targeted. Unnatural Selection only occurs if any captured creatures flee from the battle.

When the Ten Gatekeepers are found they ward away Angra Mainyu from their home, but it attacks the Al Bhed excavation site instead, prompting the Gullwings to stop the menace. Angra Mainyu is the last boss of the Bikanel episode, with 333,444 HP and 9,999 MP.

Defeating it nets the Ribbon.

One strategy is to have two Dark Knights casting Darkness, which is neither physical or magical, while an Alchemist uses a Mega-Potion from her Stash command.

The player can stock up on several Soul Springs or Mana Springs and use them to deplete Angra Mainyu's MP. It has 9,999 MP, and each Soul Spring can absorb on average 1,000 MP from it. Other ways to attack its MP include a Gunner's Target MP and Samurai's Magicide.

If a Lady Luck has learned Item Reels, lining up three BARs grants the party Mighty Guard+ with Protect, Shell, Regen and maximum Defense and Magic Defense. A Songstress can help counter the boss's ability to decrease stats via Sing abilities. Magic Break from the Warrior dressphere can help lower the boss's magic damage while another character is busy siphoning its MP.

Once the boss's MP is below 200 it will start casting Osmose. With no MP left on the party it will not have a chance to regain enough to cast magic. Once both the party's and the boss's MP are low it will continuously cast Osmose allowing the player to attack for an easy victory.

Another strategy consists in using two Berserkers and a Gun Mage, considering the party has learned Mad Rush for the Berserkers, and Annihilator as well as White Wind for the Gun Mage. If the Gun Mage is equipped with the Ragnarok accessory she won't need MP, otherwise a Gold Hairpin/Ethers/Turbo Ethers can be used instead.

The player can use White Wind to heal. Annihilator will kill Zarich, while also dealing damage to Angra Mainyu. Tawrich is immune to Annihilator, but the Berserkers can use Mad Rush to kill it and to deplete Angra Mainyu's high HP. The party can use a Chocobo Wing to hasten the process, and Mighty Guard/Lunar Curtain/Light Curtain for protection. If the Berserkers has learned Howl it can be used to double the player's HP, while using a Stamina Tablet will have the same effect on the Gun Mage.

Angra Mainyu can also be defeated in under a minute with a Gunner in HP Critical with the Cat Nip accessory using Trigger Happy. This method is not viable in the International and HD Remaster versions due to Cat Nip now having Auto-Berserk.

In the International and HD Remaster versions another strategy consists in a party of either Yuna, Rikku or Paine teamed up with two other small type fiends (e.g. a Tonberry and a Dark Elemental). If the two fiends are above level 50 they will likely deal 9999+ damage with an Invincible equipped (such as Dark Elemental's Flare). The player-controlled girl should be an Alchemist to heal, protect, and revive the party. Equipping Ribbon and Adamantite helps greatly. This strategy can defeat Angra Mainyu within 10 minutes. 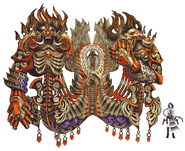 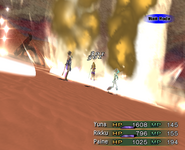