In the waters south of Galdin Quay lies a two-pronged island, famous for its unique topography—the Umbral Isle of Angelgard. As its name would imply, the island is purported to have higher connections. Said to be the spot where the gods gather and where the power of our star is centered, Angelgard is treated as sacred ground.

Angelgard is a peculiarly shaped island off the coast of Galdin Quay in Final Fantasy XV. It is a small barren island that has two peaks that could be taken to resemble wings. The island has nothing but a prison and nine towering staves stuck on the ground around it. It is a sacred island where the gods gather and where the power of Eos is centered. Angelgard is surrounded by tides and whirlpools and there are only so many days in a year a ship can even approach the island.[1]

Mysterious island off the coast of Galdin Quay, long rumored to be the spot where the gods gathered. Some devotees used to offer prayers from the dock of the quay, but none ever set sail for the Umbral Isle to make their prayers in person. The island is regarded as sacred ground never to be tread upon: not even the royal family is allowed access.

A series of reefs surround Angelgard cutting through the oceanic currents and threatening to sink any ships that veer too close. While ferries and fishing boats typically avoid the island, some truly adventurous anglers have been known to approach the Umbral Isle in hopes of landing a big haul, but those reckless souls rarely return.

Angelgard, off the coast of Galdin Quay, is an uninhabited island that Lucians regard as sacred ground. Ancient texts tell of a monster known as the 'Adagium' supposedly sealed away within, but investigations into its existence have yet to provide conclusive evidence.

The world was once in peace with the Six Astrals looking over Eos. Angelgard was once their meeting place, where they would bestow their powers upon humanity. In antiquity it was a prison island where criminals were sent to reflect upon their sins. Ramuh would pass judgment and smite those he deemed unworthy with a bolt of lightning. After the War of the Astrals Ramuh went to rest in Angelgard. After Ardyn Lucis Caelum's fall from grace, he was chained in Angelgard for 2,000 years. The royal family of Lucis, wanting to conceal that the infamous "Adagium" was imprisoned on the island, forbid commoners to set foot there. The island thus became a sacred landmark viewed with revere from Galdin Quay, but never tread upon, not even by the royal family themselves.

Imperial scientist Verstael Besithia learned of the "Adagium" from ancient tomes salvaged from a royal tomb, and came to Angelgard. He and his troops freed Ardyn who was soon attacked by the Lucian Royal Guard trying to prevent his exit. Ardyn used daemonic powers to subdue his oppressors, learning that he has the power to daemonify others and glimpse at their memories while doing so. Verstael took the weakened Ardyn away to his research facility in Niflheim.

Ardyn becomes an ally of Niflheim, and years after being freed from Angelgard conspires to attack Insomnia. His attempt to kill King Regis is thwarted when Bahamut spirits him away, and Ardyn awakens from his encounter with the divine back at Angelgard.

After a two millennia long slumber, Ramuh is awoken by Lunafreya Nox Fleuret, the Oracle, who wants him to forge a covenant with Prince Noctis. After forging his covenants with the Astrals and meeting Bahamut, Noctis sleeps inside the the Crystal for ten years. During this time, the remaining Kingsglaive visit the island at Bahamut's behest. The five remaining Astrals appear, with Bahamut challenging the Kingsglaive to a duel to test their worth and redeem themselves for their failure to prevent—or culpability in—the death of Noctis's father King Regis.

Having triumphed, Bahamut redeems the Kingsglaive and tasks them with protecting Angelgard from daemons while Noctis undergoes his Revelation. Eos is enveloped in the long night, Angelgard being the last place on Eos that falls into darkness.

After ten years, Noctis awakens at Angelgard with the sky black and with not even the stars showing. He meets the Messenger Umbra that has a message for him from his friends to meet them at Hammerhead. Noctis discovers his father's yacht, which he steers to Galdin Quay. As he leaves the island, Noctis meets with the exhausted Kingsglaive and Gentiana, who asks that he fulfill his duty as the True King so their sacrifices will not be in vain.

"Eye for Islands" is a quest for Vyv at Lestallum that becomes available after completing "The Perfect Landscape". Vyv requests a photo of the island taken from Galdin Quay. Completing the quest yields 1,500 EXP and 7,500 gil.

When sailing the seas on the royal vessel in the Windows and Royal Editions, Prompto will suggest they take a picture of Angelgard.

Monster of the Deep[]

When sailing the royal vessel in the Windows and Royal Editions, Gladiolus speaks up of a fishing spot near Angelgard. Sailing onto the spot completes the mission. The player can fish the rare Mummy Bass there by hooking a fish and not reeling it, using the fish itself as the bait.

Mummy Bass is the hardest fish to catch. The player should have the ultimate fishing gear and use Dragon's Beard line. Eating Kupoberry Cheesecake also helps. One trick to reeling the fish in is to tap the pause button and adjust the reel/do not reel as needed, and always reel to the direction the fish swims, even before the prompts appear on-screen.

The team created a clay model of Angelgard to render its shape. The model was then digitized.

If the player goes to the Galdin Quay dock at the end of the restaurant, they have the option to have Noctis sit and look toward Angelgard. Angelgard may be connected to Bahamut's realm, as both Noctis and Ardyn end up on the prison cell within after encountering him in his domain.

Out of bounds glitch[] 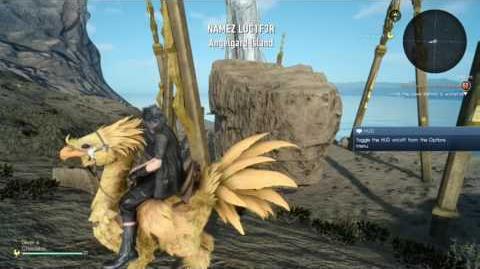 It is possible to visit the island via an "out of bounds" glitch if the player swims there on a chocobo. It is not possible to fly the Regalia Type-F across it, but with the chocobo glitch the player can get a better look at the swords left on the site.

Concept art of the prison.

Concept art of what could be a precursor to Angelgard.

Cutscene for approaching the island with the royal vessel. 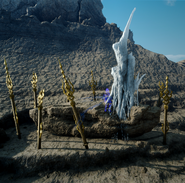 The staves around the prison. 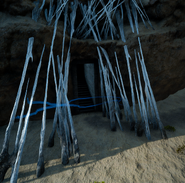 Window near the prison ceiling.

Kingsglaive member in Angelgard in Comrades.

Within the world of Eos, the island may have been named for its shape, perhaps seen resembling angel's wings. -Gard is a Germanic suffix often associated with placenames.

[view · edit · purge] Gard is Norwegian for "enclosure". It is also Kashubian for "city".