Angel Wing (ヴァリー, Varī?) is Rinoa's second Limit Break in Final Fantasy VIII, acquired after boarding the Ragnarok. When executing Angel Wing a pair of white wings, similar to the ones printed on her blue sweater, momentarily emerge from Rinoa's back. It causes Rinoa cast empowered offensive magic spells in her inventory without actually expending them, though the player loses control of Rinoa at this time.

Activating Angel Wing will have Rinoa enter a "Magic-Berserk" status; players lose control of her until the battle's end, or until she is defeated or petrified. If Rinoa is petrified/defeated, the Angel Wing status will be gone when she is revived/cured. During Angel Wing Rinoa is immune to Berserk, Confuse, and Silence. Since Angel Wing works by granting a status effect, it will not work when Rinoa is Invincible (e.g. from Invincible Moon).

During Angel Wing, Rinoa will automatically cast an offensive spell present in her inventory without actually expending it, important for maintaining the effects of junctioned spells. If there is any valid magic, one of the 32 magic slots is selected at random. If the selected slot does not contain any magic or contains magic that would not be cast during Angel Wing, it keeps selecting the next magic slot (it rolls back around to the first one if it reaches the last slot) until a valid magic is found and then casts this. This means that if they player has a lot of empty slots or support magic, the magic after this is more likely to be cast. Double and Triple statuses aren't used. Rinoa's magic damage will be five times as powerful as its base damage, even when her Magic stat is already at the maximum 255. The increased damage multiplier will work even with Demi, which, instead of draining the opponent's HP by 25%, can kill the target. If Rinoa has no magic in stock while in the Angel Wing state, she will attack a random enemy.

To prevent Rinoa from casting unwanted spells, the player can remove them from her inventory. Rinoa can become a devastating character if one manipulates her magic junctions in such a way that Meteor is the only, or the weakest offensive spell she has in her arsenal. Since weaker spells are more likely to be cast, carrying some Ultima for junction doesn't influence the odds much. Curative and buffing spells, such as Full-life and Triple, are not used during Angel Wing, and can thus be useful for junctions.

With the boost in magic damage and the appropriate magic stats, Rinoa could potentially be doing close to 99,990 damage in one attack round (Meteor hits 10 times, potentially for 9,999 each hit). Even with the 5x damage multiplier and capped magic at 255, it is still difficult to force the Meteor spell to exceed 7,500 damage per meteorite strike on harder bosses, such as Omega Weapon. The player can inflict the target with Vit 0 to reduce its Spirit to 0 to deal more damage.

In most cases, executing Angel Wing with Meteor is the stronger alternative to attempting Rinoa's Wishing Star. Considering Combine being random, and as the battle system is Active Time Battle taking place in pseudo real-time, the a player not having to manually input commands for Rinoa after Angel Wing is initiated increases her damage-over-time capabilities, especially when equipping with Auto-Haste.

Apocalypse is compatible with Angel Wing, but can only be obtained during the last portion of the final battle in a normal playthrough.

Rinoa appears with angel wings after invoking her secondary ability Angel Wing, which converts her Ranged attacks to enhanced Magic attacks and raises MAX BRV for 3 turns. However, Angel Wing mode drops her defense by a large amount and causes all attacks to drain her HP. Damage incurred does not count against the player’s overall score. It has 4 uses, and can be canceled out with Angelo Cannon.

Angel Wing Meteor is her EX Ability, referring to the powerful combo in Final Fantasy VIII of junctioning Rinoa with Meteor as her only offensive spell, and then using Angel Wing prompting her to barrage enemies with meteorites. This ability strikes all enemies three times and places Rinoa in Angel Wing mode for 3 turns. 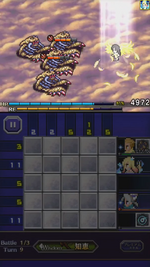 Angel Wing spell abilities are a subset of Rinoa's Soul Break skills, which are granted by thrown weapons native to her realm. 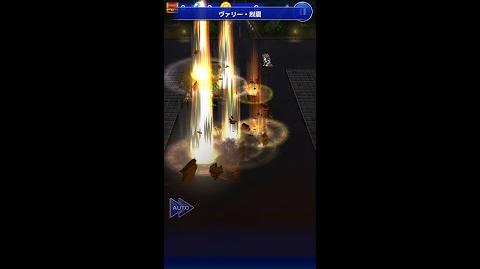 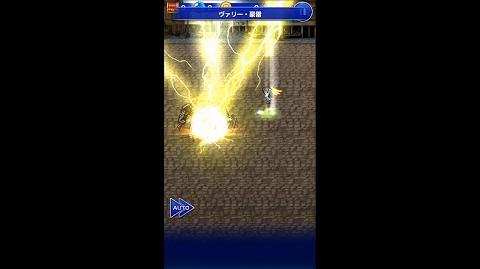 Angel Wing clears Rinoa's stat reductions for ATK, DEF, MAG, and SPR, increases her MAG a large amount, with the turn following its use granting an exceptionally large increase to MAG, and enables Triple for three turns. It can be used every 6 turns and becomes available on turn 1, costing 80 MP to use. Cosmetically, Angel Wing always appears to be active in her 6★ and 7★ sprites.

The Angel Wing is permanently activated in Rinoa's appearance in Dead Fantasy II. She demonstrates her augmented sorceress powers by conjuring lunar portals from the moon and showcasing telekinetic abilities. Her wings are used for flight and protection. Rinoa casts four offensive spells, first using Blizzaga to freeze the lava lake to save her comrades and the team Dead or Alive. She casts Holy and Tornado by junctioning to her blaster edge, and casts Ultima after executing her ultimate Limit Break, Wishing Star, towards team Dead or Alive while inside the tornado. 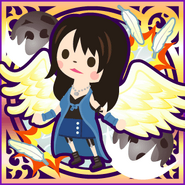 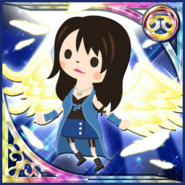 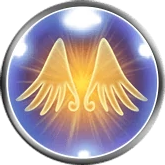 Artwork of Rinoa with angel wings for Puzzle & Dragons.

Rinoa casts Ultima in Dead Fantasy.
Add a photo to this gallery