Angel Song (天使の歌, Tenshi no Uta?), also known as Seraph Song, Canticle, and Angelic Aria, is a recurring ability in the Final Fantasy series. It is usually a song usable with the Sing command, and heals the party in some manner.

Angelsong is an enemy ability used by Toad-type enemies and Baknamys wielding guns. It grants Regen to all allies in range.

Seraph Song is sung by the Bard, and restores MP to all allies on the battlefield. It has the speed of 17 and it cost 100 JP to learn.

Angelsong grants Regen status to an ally within a range of 4. It costs 200 AP to master.

Restores all allies' HP and MP while singing for the duration of the song.

Angelic Aria is the level 17 ability of the Bard class, requiring 450 AP to learn. At the cost of 54 MP, the user will continuously restore HP and MP to the party for the duration of the song. The amount restored each tick equals to MAX HP / 128 and MAX MP / 128.

Angel Song is a Rank 5 Bard ability. It casts a high-powered Regen on the party. 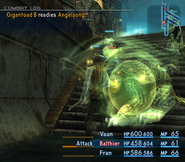 [view · edit · purge]A seraph, the singular of seraphim, is one of a class of celestial beings mentioned once in the Hebrew Bible (Tanakh or Old Testament), in the Book of Isaiah. Later Jewish imagery perceived them as having human form, and in that way they passed into the ranks of Christian angels, where they represent the highest rank of angels. They are traditionally depicted with three pairs of wings, from a description given in Isaiah: "With two, they covered their faces; with two, they covered their feet; and with two, they flew."