It is said the angels themselves made this ring of benedictions.

The Angel Ring (天使の指輪 or てんしのゆびわ, Tenshi no Yubiwa?), also known as Cure Ring and Angel's Ring, is a recurring accessory in the Final Fantasy series. It generally grants the Reraise status, or protects against either Zombie or Vampire. 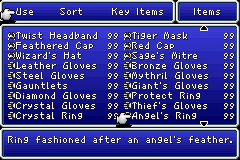 Ring fashioned after an angel's feather.

The Angel's Ring only appears in the Dawn of Souls version. It can be equipped by the mage classes, providing +8 Defense, -1 Evasion, +1 Weight, and recovering a small amount of HP each turn. It is supposed to be found in the tenth chest on the thirtieth floor of Whisperwind Cove. However, due to the floor that the ring is supposed to appear on never appearing, it is impossible to get this accessory through normal means.

Ring that resists aging and zombification.

The Angel Ring is an accessory that can be bought in either Istory and Phantom Village for 50,000 gil. It can also be stolen from Druid, and found behind a waterfall in the cave area in the Interdimensional Rift (the waterfall above the area where Omega is located). It grants immunity to the Old and Zombie statuses, as well as providing +10 Magic Evade.

Ring adorned with a pair of silver angel wings. Casts Regen on the wearer.

Angel Ring (Cure Ring on the SNES) grants Auto-Regen upon the wearer. It can be found at the Imperial Observation Post, bought from the Auction House, in Nikeah, South Figaro, or Thamasa, stolen from Apocrypha, or morphed from Holy Dragon, Typhon, or Alluring Rider.

Angel's Ring is a ring that provides CHR +4 and Light Resistance +9. It can be equipped by all jobs at level 72. It can be obtained by using an Ebon Key on a Tenshodo Coffer in the "Ode of Life Bestowing" quest.

A ring that bestows an angel's aegis upon its owner.

The Angel Ring is an accessory that costs 20,000 gil to buy, grants Reraise at the start of battle, and grants immunity to Blind and Instant Death. It becomes available in the shops in Chapter 4 and can be found with Treasure Hunter in the Fort Besselat North Wall.

Ring of blessing said to have been made by angels.

The Angel Ring gives immunity to Zombie, Blind, Frog, Poison, Slow, Silence, Immobilize, Disable, and Doom, as well as granting Auto-Life. It is acquired by raising Craft up to level 20.

Angel Ring grants Reraise once per battle, and can be bought for 6200 gil after creating it in the bazaar by using a Lightwing Crystal, Mythril, and Wyrmtwig.

The V version of the Angel Ring appears as a Rank 3 Accessory. It raises Resistance by 3 and Mind by 15.

The Tactics version of the Angel Ring appears as a Rank 5 Accessory. It raises Mind by 10.

A ring adorned with the wings of an angel that automatically casts regen on the wearer, and gradually replenishes his or her health. The discovery of countless accessories that hold great power actually began when the angel ring was excavated from some old ruins. Actually, various traces of ancient battles can be found in every part of the world, which leads many to assume that people have been using their own bodies to fight for quite some time.

Angel Ring is an accessory that provides 3 DEF, 3 SPR, and Auto-Regen. It can be crafted after finding the recipe from Gronoa Shrine Entrance and then using 10,000 gil, x3 Cure, x1 Regen Ring, x10 Light Megacrysts, x5 Elemental Tears, and x1 Polymer Emulsion, found in a chest during the explorations of Water Shrine and Mysidia Underground, or as a reward for completing Intermediate S-4 in the Colosseum.