Angel's Bow (エンジェルボウ or 天使の弓, Enjeru Bō or Tenshi no Yumi?), also known as Angel Bow, is a recurring weapon in the Final Fantasy series. It is generally a mid-ranked bow with average attack power.

Angel's Bow is a weapon for Serah that can be bought from Episode 5 onward for 2,200 gil and a Segmented Carapace. It provides 23 Strength, 34 Magic, ATB Rate: +35%, and Low HP: Power Surge as its synthesis ability.

Angel's Bow is a weapon available for Selkies that provides 56 Strength and 5 Magic. It can be crafted with the Angel's Weapon scroll.

A whimsical bow made of silver and adorned with pink feathers. It offers excellent flex at normal temperatures. It comes with arrows tipped with heart-shaped arrowheads that have a charm effect on its targets. [Attack: Charm (low)]

In Bravely Default, Angel's Bow provides 56 P.Atk, 95 Aim, and a has 25% chance to inflict Charm when attacking with it. It can be bought for 3,500 pg from the Adventurer as part of the Norende reconstruction.

In Bravely Second: End Layer, Angel's Bow provides 69 P.ATK, 95 Aim, and deals 50% more damage to undead. It can be found in the Twilight Ruins. 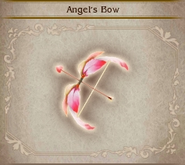 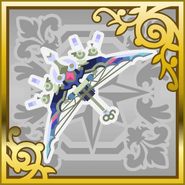 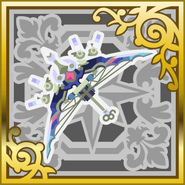