Angeal... WHAT HAPPENED TO HONOR?!

Angeal Penance is a boss in Crisis Core -Final Fantasy VII-. It is a fusion of Angeal Hewley and several Angeal Copies.

Information in brackets refer to when Angeal Penance is fought during mission 5-1-6.

Zack's emotions are high and thus affect the DMW, providing a greater chance of Modulating Phase.

The player should avoid Angeal Penance's charging attack and attempt to land critical hits on it by attacking from behind. Angeal Penance's attacks can be difficult to dodge, but the player can avoid most of them by hitting it from the behind. Firaga will also most likely cause high damage.

Zack is best equipped with a Bolt Armlet or any other Thunder-resistant accessories to minimize the damage caused by Angeal Penance's Lightning attacks. Angeal's elemental attacks can also be easily nullified if Zack has an Elemental Ward Materia equipped. On occasion, Angeal will cast Barrier and MBarrier to protect himself; however, this should not be a problem if Zack has Dispel Materia equipped. 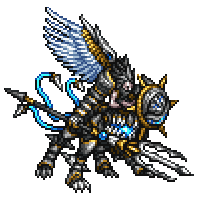 [view · edit · purge]Penance is repentance of sins as well as the proper name of the Roman Catholic, Orthodox Christian, and Anglican Sacrament of Penance and Reconciliation/Confession.

Each one of Angeal Penance's attacks except Double Trident Slash is named after one of the Seven deadly sins (pride, greed, gluttony, lust, envy, sloth, and wrath).

Retrieved from "https://finalfantasy.fandom.com/wiki/Angeal_Penance?oldid=3281957"
Community content is available under CC-BY-SA unless otherwise noted.