I am thankful for all your help. This is a symbol of how I feel.

Ang is a character and summonable vision from Final Fantasy Brave Exvius. He is only available in the global version of the game. He is obtainable during the Festival of Love event.

Ang has long black hair and wears a red bao on the back of his head. He wears a stylized archer's outfit with a violet neckline, teal shirt, white pants and white shoes. He wields a purple bow emanating a gold symbol. He also has two arrows in his quiver.

After evolving Ang for the last time, he adorns his lower half with red armor. He now wields a red bow with gold tinges at the edge that emanates a grander gold symbol. He now has three arrows in his quiver.

Ang is a determined young man who decided to pursue archery as he recognized he did not have the talent for swords. His skill with the bow has allowed him great confidence in his actions. He displayed tremendous affection for Yan, deciding to undergo a trial to gain her hand in marriage. The depth of his pure intentions had reached Chow who in turn aided Ang in the trial.

5★ - No. 8128: A young archer from a certain village of swordsmen. Unfortunately for Ang, lacking a talent for fencing meant growing up under the judgmental eye of the other villagers. It was only by chance that one day a wandering traveler introduced him to the bow and arrow, and discovering he had a knack for it, decided to become an archer. Having come a long way, Ang is now confident that his skills with the bow far surpass those of any swordsman.
6★ - No. 8129: An excellent hunter from a certain village with arrows that pierce through anything they touch. Ang loved his paramour Yan more than anything, and was determined to undertake a perilous trial to prove his worth and gain her hand in marriage. His pure intentions behind this persuaded the divine beast Chow to watch over him, allowing him to successfully complete the trial unharmed. Rumor has it he now enjoys a life of bliss next to his loving wife every day.
Entries for different versions of Ang.

One day, Master Guan, master of the sword, decided to hold a competition in which participants were to race to obtain the legendary twin blades that rested upon the dragon's peak.

To the victor, Master Guan promised not only the title of number one swordsman in all the vullage, but also the hand of his daughter, Yan, in marriage.

Upon hearing this, Ang, who was in love with Yan, vowed to be victorious so that Master Guan would acknowledge the pair's love for one another.

Ang's stats at his highest levels are as follows (with no passive abilities taken into account), along with the maximum amount of stat points that can be increased through pot-enhancements:

Ang can equip the following weapons: bows and throwing.

He can equip the following armors: light shields, hats, clothes and light armor. He can exclusively equip the Flax Shield light shield. 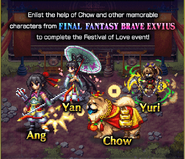 Ang, Yan, Chow and Yuri featured on the banner announcement for the "Festival of Love" event. 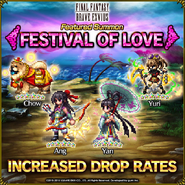 Ang, Yan, Chow and Yuri featured on the rate up banner for the "Festival of Love" event.

This section is empty or needs to be expanded. You can help the Final Fantasy Wiki by expanding it.
Final Fantasy Brave Exvius characters
Community content is available under CC-BY-SA unless otherwise noted.
Advertisement