A large sword forged using methods passed down from smith to smith since antiquity.

The Ancient Sword (古代の剣, Kodai no Tsurugi?) is a sword in several of the Final Fantasy games. It is often capable of inflicting a negative status, frequently the Curse ailment, or one which limits movement and attacking, such as Petrify and Immobilize.

A sword that evokes an ancient curse.

The Ancient Sword is the fourth weakest sword, and may inflict Curse when attacking physically. It has an Attack power of 25, Accuracy of 10%, and Evasion of 2%. It can be found in the Snow Cave and in the Unknown Cave.

The Ancient Sword is a sword that in the 3D versions can Paralyze the target. In the remake, it is a mid-level sword with an Attack power of 80, and can be found in the Sunken Cave.

In the NES version, it provides an attack power of 5, is imbued with the element holy, and can be bought at the Ancient Ruins for 16,500 gil.

The Ancient Sword (Coral Sword in the Easy Type version) is a low-ranked sword for Kain and Cecil. It inflicts Curse on strike, and only has an Attack power of 35 and an Accuracy of 27. This weapon is metallic. It also deals more damage against ghoul types, and can only be found in the Ancient Waterway.

In the 3D versions, it has an attack power of 30 with an accuracy of 90 with the same properties as the 2D versions. It can be equipped by Cecil and Kain, and Golbez if hacked into the party.

The Ancient Sword is a mid-ranked sword, providing 35 27% Accuracy, and has a 30% chance of inflicting Curse. It is initially equipped on Golbez (Lunarians' Tale). It can be equipped by Cecil, Ceodore, Kain, and Golbez.

The Ancient Sword has a 33% chance of inflicting the Old status on strike and has an Attack power of 40. It is first found in the Ronka Ruins, but can later be stolen from Landcrawlers in the merged world.

The Ancient Sword is a sword which has a chance of inflicting Curse on strike. It can only be obtained through a fishing sidequest.

The Ancient Sword is a sword that inflicts Gradual Petrify on strike. It requires the Swords 2 license to equip. Swords are among the slower weapons with 2.88s charge, and 1.2s action time. Ancient Sword can be found in a chest in Dreadnought Leviathan, and bought for 2,400 gil at Rabanastre.

In the Zodiac versions, it now provides 35 Attack, 5 Evade, 32 CT, 5% combo rate, has a 15% chance of inflicting Petrify on a target, and requires the Swords 3 license for 35 LP. It can be bought in Rabanastre, Bhujerba, Dalmasca Westersand, Nam-Yensa Sandsea, Tomb of Raithwall, Balfonheim Port for 2,450 gil, found as a treasure in Ogir-Yensa Sandsea (Platform 1 - Refinery), or stolen from Urutan Eater (10% chance). It can be equipped by the Knight job.

The Ancient Sword is a

Paladin. It can be found in

The Stone Vigil as a treasure, a drop from the bosses Chudo-Yudo or Isgebind, or a reward for completion of the duty.

A sword constructed using ancient techniques that have long since perished from the world.

The Ancient Sword is a sword which can inflict Immobilize upon attack. It can be bought for 5,000 gil in Chapter 3, but first can be stolen from Gaffgarion at the end of Chapter 2.

Ancient techniques were used to make this sword.

The Ancient Sword is a greatsword equippable by Paladins and Soldiers, and teaches the Subdue and Magicbreak abilities respectively. By equipping the Ancient Sword, a unit will be immune to Petrify. It provides +32 to Attack and can be purchased from Cyril for 1,600 gil and from any other town for 1,800 gil.

The Ancient Sword has an Attack power of 38. It teaches the Soldier Rend MP ability, the Ravager Battle Cry, and the Lanista Sword of Darkness. It is also makes the wielder immune to Stone. It costs 1,450 gil at the shops and must be made through the Bazaar by using a Sanative Needle, Pointed Horn, and Spruce.

Ancient Blade is a weapon for Queen. It provides 15 Attack Power and is bought from Roshana for 2400 gil.

The Ancient Sword appears as a crafting material, but it can also be used as a weapon.

A blade crafted by an old, obsolete method. Perfect reproduction, faithful in every detail.

The Ancient Sword is a Clavat weapon that provides 90 attack. It is created with the Relic Weapon scroll and sells for 700 gil.

The Ancient Sword is a level 36 sword that adds 27 to Attack and increases the EX Gauge by 20% at the start of the battle. It can be traded for at the shop for 10,750 gil, a Sun Blade, and Black Stone.

A sword from a bygone age said to curse any who trifle with it. Serious business.

A sword imbued by its ancient crafters with a curse that paralyzes enemies.

A sword from a faraway world. Due to its name, it is easy to think of it as a relic, but the blade retains its sharpness. In that world, it could be found in certain ancient ruins. However, it seems those ruins were floating in the sky and surrounded by artillery, making them difficult to enter.

A sword forged in ancient times. Also known as the Harvester, the aura emanating from this blade has an immense effect on plants, and it is said that just one swing will exterminate all vegetation in its vicinity. This legendary blade is said to reside where the fiendish Tiamat makes its den, and as such, no one has seen it with their own eyes.

Ancient Sword (FFV) is a Sword that provides 103 ATK and enables usage of the ability Old. It can be obtained during the Final Fantasy V event, Castle Exdeath. 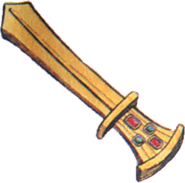 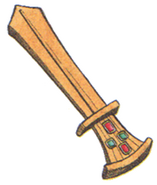 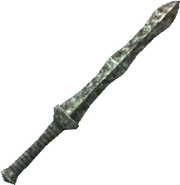 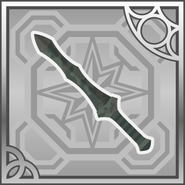 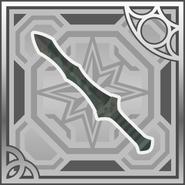 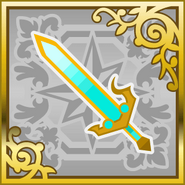 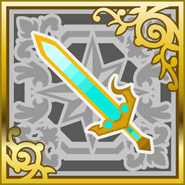 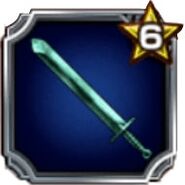