Relm: I couldn't miss the chance to practice my drawing!
This article is in need of a few pictures. Perhaps you can help by uploading a picture of battle backgrounds.

The Ancient Forest is a hidden location in Final Fantasy VII situated on a plateau in the Cosmo Area just south east of Cosmo Canyon. The player can get there by a green, black, or gold chocobo. When the Ultimate Weapon is defeated, it leaves a crater that allows the player to reach the forest by foot.

The Ancient Forest is a puzzle involving the use of plant pods and the placement of frogs and flies to progress. It contains many rare items and enemies. An unusual feature to the forest is that if the player gets stuck or lost, they can press

to instantly return to the entrance, although it cannot be used in Treetops and Cave screens. The enemies around have an annoyingly high evade, so using weapons with 255% accuracy helps: God's Hand for Tifa, and Long Barrel R and Sniper CR for Vincent.

If the player manually changes the

on the settings to do other than its default purpose, such as to set it to open the menu, the assigned purpose for the button won't work as

will always transport the player to the beginning of the screen.

By walking cautiously towards the carnivorous flower while pressing [OK], the player gets the Supershot ST for Vincent.

The best way to get across the hanging plants is to grab two frogs and leave them somewhere nearby, and then get another frog. The player can then set the frog in the plants in a row to get across. On the other side there is a Spring Gun Clip behind the tree for Red XIII.

To get the Slash-All Materia from the carnivorous flower, the player must put the beehive into it. The flowers with pink "tongues" can be used to jump across, and a frog is needed to shut the hanging plant. Up on a little ledge the player should find a frog and two hanging plants, one on each side.

The player should take the frog and put it in the left plant and jump on top of it. The plant will spit out the frog sending the player on a higher ledge where they can get the beehive. Using the frog again in the plant on the right side lets the player proceed to the next area. The treasure on the tree trunk cannot be reached yet.

Climbing down the tree on the left part of the area, the player should grab a frog, and put it into the first of the two hanging plants on the right. Because one of them is already closed, the player can go across and reach the beehive, which can be used to close the carnivorous flower nearby. The player should then take the remaining frog and use it on the hanging plant on the left side of the carnivorous flower to get across. There is one more frog on the left, and putting it into the tree hole lures out a frog who comes out to eat the fly.

There is an Elixir and the Apocalypse weapon for Cloud on the way out.

1st and 3rd screens are the left area and right area respectively, while the 2nd screen is the center area. Treetops is on the north side of the third screen. Cave is on northeast side of this place.

Dummied dialogue suggests a person in Bone Village gives details on the puzzles in Ancient Forest. The dialogue would allow the player to find information about Pitcher Plants (which carry insects and launch the character), "Big Eaters" (大喰らい, Ōgurai?) (not translated in the English version, shut and damage the player when ran over), and Inchworms (しゃくとり虫, Shakutori Mushi?) (the pink bouncy rope-like things that can be jumped onto). A dialogue-option for Scent Balls (くす玉草, Kusudama Sō?) (which neutralize Big Eaters) exists, but no dialogue for its explanation exists in the data.[1]

There is a cave visible in the Corel Valley forest exit area that has a vine leading up to it, but the cave does not have exit data, and the vine has no climb data. It is indicated it was originally the exit of the Ancient Forest due to the dummied dialogue from Bone Village, an unrelated location, but also the order of the fields in-game, which are almost entirely in visit-order, that place the Ancient Forest fields after the Sleeping Forest fields (which are after the Bone Village fields).[1]

"In Search of the Man in Black" from Final Fantasy VII

The background music for the Ancient Forest is "In Search of the Man in Black" (黒マントの男を追え, Kuro Manto no Otoko o Oe?). The first in-game appearance of this composition is in the Mythril Mine.

Concept art of the traps.

Concept art of the second area.

Concept art of the third area.

Concept art of the treetops area.

Concept art of the third area. 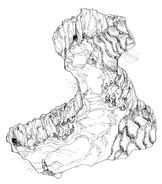 Concept art of the fourth area.