Odin, Queen of the Ancient Castle

The Ancient Castle is a ruined castle buried between Kohlingen and South Figaro in Final Fantasy VI. It is accessible once the Falcon has been obtained. While traveling beneath the sands, the man responsible for Figaro Castle's dive engine will mention they stumbled upon something; the player should decline further movement and go to the prison cells where the cell on the far right will provide the entrance to the Cavern to the Ancient Castle. Many enemies in the area automatically have Reflect status and high Magic Defense.

1000 years ago during the War of the Magi, the castle was home to a queen and several espers. The queen had fallen in love with one of the espers, Odin, in spite of romance between human and espers being forbidden, but she hid her feelings.

The castle came under attack by an enemy force and the only esper left to defend them was Odin. While Odin felled many enemy soldiers, he was confronted by a great sorcerer who was immune to his Zantetsuken. The sorcerer petrified Odin and the castle fell, while the queen was also petrified and left in a secret passage in the basement. Over the years, the castle was lost underground and the battle between Odin and the sorcerer became legend.

In the World of Ruin, Figaro Castle bumps into the cavern with the castle while burrowing underground. The party stops the castle to investigate the cavern. After the group traverses through the caverns, they find the remains of the Ancient Castle and recite its legend from the War of the Magi. Within the castle's throne room, the party encounters Odin's petrified body and receives his magicite.

As the group ventures deeper into the castle's chambers, they find the ancient Queen's diary, discovering her love for Odin. If Terra is in the party, there will be a brief additional scene where she muses on there being love between a human and an esper, a reflection of her own mother and father. After discovering the secret passage within the room, the party finds the Queen's petrified body mourning, causing Odin's magicite to react and transform into Raiden.

The cave into the castle is very winding, with paths crossing over each other across uneven terrain. Eventually a staircase in the center of a room heads down to a save point before going to the castle grounds.

The ancient castle is in ruins and has an intact moat, or perhaps it is located in an underground lake. A walkway with several small flights of stairs leads up to the castle courtyard, where side doors lead into auxiliary chambers and a set of double doors enter the main hall which leads into the throne room. The throne room has a secret switch in front of the thrones that opens a hidden passage in a seating area in the eastern wing, which is seemingly where the castle's inhabitants sought refuge during its siege.

Two chests in the first cave area contain a Hi-Ether and a Wing Edge. A chest in a sectioned-off cave in the next area is a Monster-in-a-box, a Master Tonberry that drops a Gladius. A chest nearby in the same area has Death Tarot, and two chests in the staircase to the save point contain a X-Potion and a Magicite Shard

Within the castle grounds, the door to the right of the entrance leads to a chest with a Punisher, and the left door leads to a chest with a monster-in-a-box, Samurai Soul, which drops a Master's Scroll. A room behind the throne room contains two chests with a Blizzard Orb and a Gold Hairpin. Finally, the pot in the seating area with the secret staircase contains an X-Ether

The party encountering the petrified Odin and Queen.

Odin's petrified remains in the throne room can be interacted with to cause them to crumble into the Odin Magicite. A hidden switch on the fifth step before the throne reveals a staircase into the dungeon, where the queen's petrified remains can be found. Inspecting the queen's remains causes the statue to shed a tear which transforms Odin into Raiden.

In the Super NES and PlayStation releases, upgrading Odin into Raiden is a contentious matter, as Odin is the only esper in the game to give a Speed bonus on level up, so for pure min-maxing of stats it may be desirable to keep Odin as Odin for a time. However, this means putting off getting access to the powerful Quick spell that only Raiden teaches. In the Game Boy Advance release and re-releases based on it, the Cactuar Magicite gives a better Speed bonus, rendering the choice moot.

The Blue Dragon, one of the eight legendary dragons, is found in the dungeon in the secret chamber in the west wing. 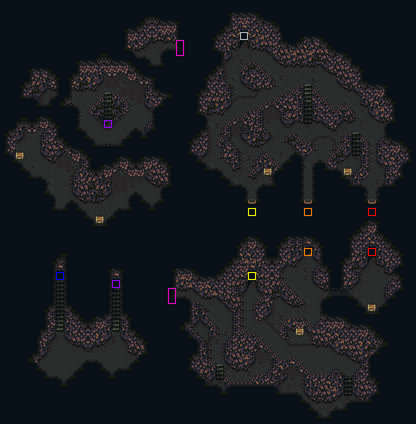 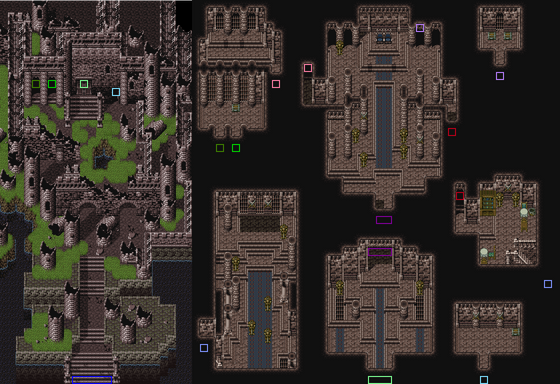 "The Serpent Trench" is the background theme of the Ancient Castle.

The Ancient Castle appears as a Core dungeon.

In the Japanese versions of the game, the Queen is referred to as a Princess.

The unique effect of the enemies bisecting from Odin's Zantetsuken is accomplished with a sleight of hand trick of spritework - the enemies are actually two separate sprites, designed and positioned to appear as one whole sprite. When Odin uses Zantetsuken, the upper sprite merely moves aside from the lower sprite, giving the appearance of an enemy cut in two. 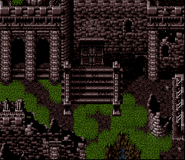 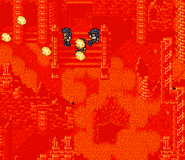