Village of the Ancients

Various machinery throughout the world

Desch
The Ancients are an enigmatic group of people in Final Fantasy III. Not much is known about these mysterious beings, except for the fact that this race caused the Flood of Light and exiled themselves in shame. But across many years they have left their mark in form of ruins with walls full of glyphs and machinery mechanisms across the world. According to Unei, the Invincible was built by the Ancients and it's implied in the library of Saronia that they also invented the Enterprise and the Nautilus.

Desch is one of the last surviving Ancients. While the effects of this heritage are not precisely known, it may have helped him survive his fall into the lava-filled passages at the Tower of Owen. The only other named Ancient is his father, a scientist named Owen.

Their home town is the Village of the Ancients, which is located southwest of Castle Argus. The small town houses useful goods, such as decent magic and weapons. Also, the Ancients' Maze is home to the Earth Crystal. Its walls are lined with archaic glyphs, which follow the maze to the entrance to the Crystal Tower. The Ancient Ruins, and all of its content is also work of this tribe. 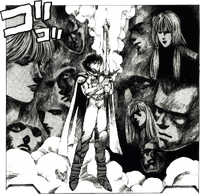 In Yūkyū no Kaze Densetsu: Final Fantasy III Yori, during the battle against Hein after Shiva shatters Muuchi's sword, the Ancients mysteriously bestow the Sword of the Ancients unto Muuchi.