My dreams, too, fade into day.

Anastasis is the current Gran Kiltias of the Kiltia sect in Final Fantasy XII. He is a Helgas and a Dreamsage, able to enter the dreams of others. Anastasis dreams in the temple on Mt Bur-Omisace and sees more than those who are awake. He leads Mt Bur-Omisace, regarded as the holiest place on Ivalice. According to rumors heard by one of the refugees in Mt Bur-Omisace, the Gran Kiltias's position is above everyone else in Ivalice; he is said to be able to silence kings, or even an emperor with a single withering glare.

Anastasis was the one who sealed the dragon Fafnir and the Piscodaemon. Anastasis is the only Helgas featured in the game.

Anastasis is clad head to toe in elaborate blue, white and gold finery with various ornamental details. He has an old withered face and long white hair tied at the back of his head. His long white eyebrows cover his forehead. He has large pointed ears with numerous gold earrings.

Anastasis is calm, collected and patient, referring to those who seek his council as "child". Though sleeping (or "dreaming"), he is aware if his environment, and able to converse as an omnipresent voice without moving his lips. Anastasis is wise and revered, and though Vaan stumbles into their meeting unaware of Anastasis's significance, the dreamsage speaks to him kindly.

Larsa meets up with the Gran Kiltias and Al-Cid Margrace to discuss how best to prevent the coming war. Larsa learns from Al-Cid that his father Gramis Gana Solidor has been killed and that his brother Vayne has ascended the throne, making peace negotiations impossible.

Princess Ashe, wanting to strike at the Archadian Empire, and knowing that revealing herself now would be pointless, asks the Gran Kiltias for a power greater than nethicite. He suggests going to the Stilshrine of Miriam where the Sword of Kings lies. While the party goes to the shrine they leave Larsa with the Gran Kiltias who brings him to the inner sanctum.

Mt Bur-Omisace is attacked by the Empire. Judge Gabranth and Judge Zargabaath take a non-violent approach, providing troop transport and escorting Larsa back home. Judge Bergan, with the power of manufacted nethicite, has different ideas. He slaughters anyone who gets in his way, including the Gran Kiltias. The party arrives too late, and witnesses Bergan standing over the Gran Kiltias's body. The Gran Kiltias's death releases both Fafnir and Piscodaemon.

Anastasis appears as a summonable unit. He can be summoned using 200 Friend Points in Friend Summons. Initially, he is Rank 2 and his maximum rank is 3. His job is High Priest and his primary role is Healing.

Anastasis is voiced by Dwight Schultz in the English version. He is voiced by Tamio Ōki in the Japanese version. 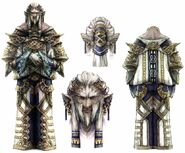 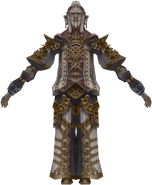