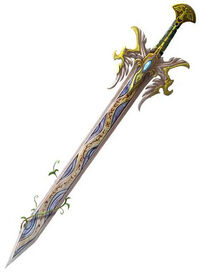 Anastasia (アナスタシア, Anasutashia?) is a recurring weapon in the series.

Anastasia is the sacred sword wielded by Vaan. A legendary blade, only those who are chosen may wield it. It uses a generic sword sprite during battle.

Vaan acquires Anastasia after the events in the world of the Yarhi in chapter 7. It is forged from Velis's soul, and defined as a "Godsblade". The sword can be fortified by completing the Midlight's Deep dungeon on the Well of Whispered Oaths, on the Keep of Forgotten Time.

Anastasia is powered each time the Well of Whispered Oaths is completed and earns +10 on every stat except attack speed, which does not change, and Speed, which gets +15. This way it is possible to keep on completing the Midlight's Deep repeatedly until Vaan is so powerful he can defeat Yiazmat alone. The max stat limits for the Anastasia are +999 for all of the boostable stats, which the player would need to clear Midlight's Deep 100 times to achieve. Vaan can defeat Feolthanos Exultant alone in under 20 seconds with Dervish activated using the maxed out Anastasia.

A staff that alters the flow of time, increasing mobility.

Anastasia is a girl's name of Greek origin. It is the female version of Anastasis. [view · edit · purge]Anastasis is Greek for "resurrection". This refers to Velis's soul being reborn in the sword.

Anastasia is best known as the name of Grand Duchess Anastasia Nikolaevna Romanova, daughter of Czar Nicholas II. According to legend, she survived the murder of the Russian imperial family by the Bolsheviks and continued to live on afterwards (though as of 2008, it has been determined she was in fact killed along with the rest of her family). This plot has been the subject of numerous works of fiction, including a 1997 Fox Animation movie, Anastasia.