Anacondaur is a fiend in Final Fantasy X encountered in the Calm Lands. It is one of the few opponents from which Kimahri can learn the Ronso Rage Overdrive, Stone Breath.

They absorb Lightning-elemental damage. Anacondaurs will open with Stone Gaze, petrifying a party member; if there are multiple Anacondaurs, only one will use it. After being targeted thrice they use an attack called Sonic Tail that strikes all party members, though it won't shatter petrified characters. If Provoked, they will use a Stone Gaze with a 50% success rate instead of 100%. When only one party member is active, they will not use Stone Gaze and their physical attack will have reduced accuracy. Against Valefor, they have a 66% chance of doing nothing and a 33% chance of using Stone Gaze, though they can still use Sonic Tail. 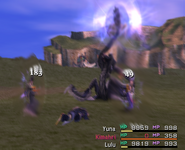 [view · edit · purge]An anaconda is a large snake found in tropical South America. Although the name applies to a group of snakes, it is often used to refer only to one species in particular, the common or green anaconda, Eunectes murinus, which is one of the largest snakes in the world. Giant Anacondas are sometimes said to be as long as thirty meters but such snakes are considered urban myths by experts.