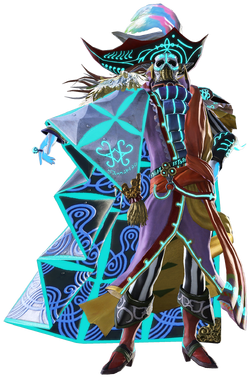 My, my, such unruly guests. 'Twould seem a little diversion is in order.

Amon appears as a giant humanoid with extravagant attire. He wears a skull-like mask with a swept-back feather hat. His attire is very fancy, consisting of a suit with a blue cravat, striped leggings, and shoes. He has a large white cape draped over his shoulder with elaborate designs on it. Much of his wardrobe bears glowing blue lines similar to the Allagan designs seen throughout the Crystal Tower and the Binding Coil. Unlike the Amon from Final Fantasy III, and by extension its palette swap Hein, this incarnation appears to be a flesh and blood man (specifically an Elezen) with macabre cosmetics rather than a skeletal lich.

His personality is equally whimsical. Throughout the battle, his mannerisms is like a showman performing for his guests, and his arena likewise suits it with a red carpet and spotlights to herald the minions he summons. Fittingly, a set of gear exclusively for Bards is based on his attire.

During the latter days of the Third Astral Era, the Allagan civilization began to go into decline and stagnated. Amon was a skilled technologist and magician in those days, and tried to revitalize the ancient Allag through an unusual plan: by resurrecting the first Allagan Emperor Xande back from the dead to lead his civilization into glory days once again. He exhumed the Emperor from his tomb and successfully revived Xande. Under the reborn Emperor's leadership, the empire returned to prosperity and resumed many of his original ambitions from his first life, eventually conquering Meracydia.

Unfortunately, the resurrection had scarred Xande's soul due to his memory of death. This brooding led to the Emperor making a covenant with the Cloud of Darkness to open a Voidgate and reduce Hydaelyn to nothingness. To accomplish this, he needed extra solar energy collected by Dalamud and its captive Elder Primal channeled to the Syrcus Tower to open the door to the World of Darkness. This proved to be too much for the tower to contain, and the excess energy released triggered a massive earthquake that destroyed the Allagan Empire and ushered in the Fourth Umbral Era.

The Syrcus Tower had sunk into the earth as a result, and so Amon had himself, Xande, and the tower's inhabitants all frozen in time until the tower was awakened by the fall of Dalamud during the Seventh Umbral Era.

Amon is the third boss of the Syrcus Tower, and final obstacle before Emperor Xande himself.

Like the other mid-bosses in Labyrinth of the Ancients and Syrcus Tower, the track "Nemesis" plays during the battle with Amon.

In-game render.
Add a photo to this gallery

[view · edit · purge]Amon, also spelled Amun, is the name of a supreme god from ancient Egypt. There is also a demon of the Goetia named Amon.