Amnesia (アムネジア, Amunejia?, lit. Amnesia) is a recurring status effect in some Final Fantasy games which has several effects, depending on the game. In some ways it resembles the status effect Addle.

Amnesia is a stronger form of Silence, preventing the use of spells and lasting until it is cured, either by a Mallet or Esuna at Lv.3 or higher.

Amnesia is a status effect which prohibits a player from using any job abilities or weapon skills. Players can still cast spells and attack as normal. Imps are the most common imposers of the status effect with their common ability Abrasive Tantara, though Lamiae, Qiqirn, and Ladybugs also have the ability to inflict the status.

As an example, the High Notorious Troll, Gurfurlur the Menacing, can cause Amnesia with his Haymaker ability.

Players who are afflicted with Amnesia may experience some difficulty in removing it, although the enchantment of the Ecphoria Ring can remove the effect when inflicted by certain of the weaker monsters.

Players may be able to inflict this status on monsters by striking them with the Great Axe Vermeil Bhuj. Certain monsters in Abyssea may be inflicted with Amnesia status by means of Weakness Stagger.

Impairment (インペア, Inpea?, lit. Impair) is a similar status that is inflicted as part of the Pathos of Alzadaal on those who dare venture deep into the Ruins of Alzadaal to take part in Salvage. It is removed by leaving the ruins, or by obtaining and using a Opacus Cell.

Amnesia is a status effect that prevents the execution of Job Abilities. It is considerably rarer than Silence or Pacification.

This section about a status effect in Chocobo's Dungeon 2 is empty or needs to be expanded. You can help the Final Fantasy Wiki by expanding it. 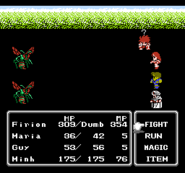