I will show you the Crystal's will, and its power.

Amidatelion, nicknamed Goldenrod by Layle, is a Yuke character in Final Fantasy Crystal Chronicles: The Crystal Bearers. No one refers to Amidatelion by a set pronoun. Amidatelion is an antagonistic Crystal Bearer who is stealing Crystal Idols. Their true motives, however, are to restore the Yuke Tribe Crystal to bring their people back.

The Yuke first appears to Layle aboard the Alexis, where they steal the crystal shards used to power the ship. Chased by Layle at first, Amidatelion eventually gains the Clavat's trust as they attempt to escape Jegran. But, with their armor damaged, Amidatelion is forced to return to their own dimension to transfer their being into a new suit of armor that looks feminine. They explain that they "chose" Layle to help them with the Resurrection, and seems to show admiration for him as a fellow Bearer.

With Layle's aid, Amidatelion manages to take the Yuke Crystal shards from the Aerial Prison. Later in the Crystal Chamber, showing sincerity in the revival of their race and stating that they set up any counters to protect the Lilty Crystal by asking for their brethren's aid, Amidatelion sacrifices themselves to save Layle by warping Jegran's crystal arm to crystallize themself instead. Before it completely consumes the Yuke, Amidatelion pleas for Layle to finish what they had started, saying that he owes them one. The player can shatter Amidatelion after defeating Jegran. They are on display at Yuke Sky City.

As a Crystal Bearer, Amidatelion is a Summoner, being able to summon Bahamut, Zus, and other creatures, such as a Behemoth when used to distract Jegran as they escape the Crystal Reactor. They show an apparent affection for the Zus the Yuke summons, and the Zus seem to have an affection with Amidatelion as well.

Amidatelion's powers also enable them to bend space allowing them to warp anything and every thing so long as there is a clear mental target and location. They are able to use this in multiple ways including defensively to block attacks, warping the attacks to another location and even offensively, warping projectiles and monsters towards their enemies or sending the attacks of their enemies against themselves.

Amidatelion can also handle themselves well in hand-to-hand combat with considerable skill and strength, as seen when they fought Layle. When Amidatelion is not fighting they tends to generate a cloak of mist.

A new design for male Yuke player characters, called "Sky Ship" (likely a reference to their first appearance on the Alexis II), is based on Amidatelion.

Amidatelion appears as a playable character. 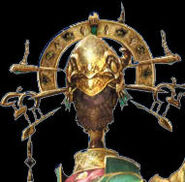 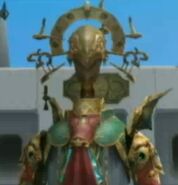