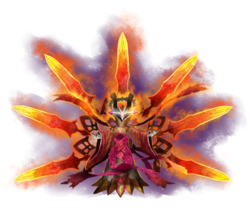 Amaterasu (アマテラス, Amaterasu?) is a recurring light-elemental summon in the Final Fantasy series. She first appeared in Final Fantasy Explorers.

Though not mentioned in-game, Amaterasu is mentioned in Encyclopædia Eorzea II as one of the Kojin's three greater deities along with Susano and Tsukuyomi, being the only one of the three to have never been summoned as a primal.

Amaterasu was originally planned to be a trial during the Stormblood expansion, but the idea was dropped in favor of Tsukiyomi. [citation needed] 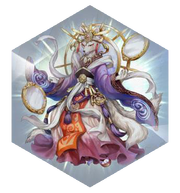 Amaterasu appears as a light-elemental summon.

Her special attack is Okami's Light, which deals light-elemental damage to a single enemy. All versions of the summon are able to go up to rank 7. Summoning Amaterasu costs 2 point from the Consumption Gauge.

The following are bonus abilities granted to characters equipped with Amaterasu. 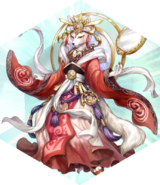 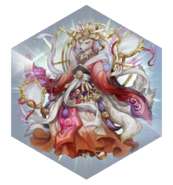 Amaterasu is a summoned monster that the Explorer fights during their quest for crystals. Initially taking the guise of a woman named Surama, she attempts to convince the Explorer that utilizing the crystals will inevitably kill the planet and that the Eidolons exist to prevent such an outcome from happening. While she inevitably does battle against them, she holds hope that they will be able to find a path where humanity can prosper without causing the death of the planet.

Her weapons of choice are seven swords that hover behind or around her. She appears to have an affinity with fire, as seen in her render and screenshots, where she is wreathed in fiery energy. Explorers fight the summon in the ruins of the Donnyglen, a ship used years ago in previous expeditions.

Her Trance Surge is Worldmaker, which causes a giant dark rift to erupt on the earth. 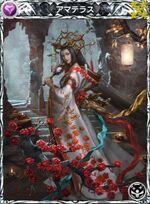 Amaterasu is an Ability Card in Mobius Final Fantasy. She is a Support-class ability, giving the ability Valorous Exemplar, restoring HP to all allies (without needing to be a Healer in Ring of Braves) and transferring all debuffs to the user, halving their duration. At maximum level, it takes three turns for cooldown.

Amaterasu appears on Triple Triad cards in the version of Triple Triad available via the Final Fantasy Portal App.

Amaterasu is a level 3 Summon for the Summoner. It restores the HP of all targets and will damage undead foes. It cannot be reflected. It costs 60 MP to use. It can be acquired east of Eternia by defeating the Anchorite of Light.

Upon reaching Job Level 11, the Summoner is able to augment their abilities, similar to the Invocation skillset of the Conjurer from Bravely Default. Amaterasu, when augmented, raises the recovery magic potency to maximum for ten turns. This spell cannot be reflected. The upper limit for recovery magic is 200%. It costs 60 MP to use.

[view · edit · purge]Amaterasu, full name Amaterasu-no-Mikoto (literally "August Person who Makes the Heavens Shine"), is the Japanese goddess of the sun, born from the right eye of Izanagi-no-Okami while he was washing himself after his journey into the underworld to rescue his wife Izanami. After her birth, she was assigned to rule the High Plains of Heaven, receiving Izanagi's necklace of rulership as a symbol of this charge. Amaterasu ended up in a long-standing feud with her brother Susano-o, but ironically the two deities' descendents are the ancestors of Jimmu-tenno, the legendary first emperor of Japan.