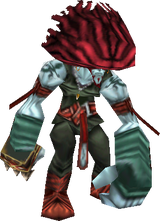 Amarant is a playable character in Final Fantasy IX. His special ability is Throw, which allows him to throw a weapon at an enemy to deal heavy damage. His skillset is Flair, which can be used for offense or defense. His victory pose is to sit cross-legged, arms folded, and head bowed. He will not pose until after the player clears the Ipsen's Castle dungeon as part of the story.

Blank is an early temporary character whose raw level (but not his statistical growth) is later inherited by Amarant should Blank's level be greater than the party average upon Amarant joining.

Amarant is also fought as a boss.

Amarant learns skills that enhance his physical fighting abilities, such as the HP-boost abilities, Killer abilities, Cover and counterattack skills. His Counter ability takes longer to learn compared to the other characters, however, all his weapons have Counter. Unusual among the physical fighters, he learns Return Magic and Healer. His unique skills are Power Throw and Power Up that power up his special skills Throw and Chakra.

Amarant's skillset is Flair, which can be used for offense (raw damage or to inflict status ailments) or defense (healing HP/MP and revive) making him versatile in battle, and allowing him to switch between attack and support.

Amarant can throw weapons, Pinwheels, Rising Suns, and Wing Edges. He can also throw the otherwise-unusable Save the Queen.

The amount of damage Throw does is based on the following formula:

Throw will do 1 damage if Amarant is in Mini status, and half damage if hitting a target with Protect. The bonus is 50% greater if the target is an aerial enemy, or if Amarant is equipped with the Power Throw ability.

In Trance, Flair becomes Elan. It is identical to his Flair abilities, but affects all targets.

Zidane fights Amarant as a boss under the name Scarlet Hair in Madain Sari. After being defeated, Zidane invites him to the party.