Have you already visited the Altocrystarium? We are the only ones allowed to access the facility, so it might be a nice idea to take advantage of it.

The Altocrystarium is a system in Final Fantasy Type-0 used to increase the level of magic abilities by spending phantoma. It allows the player to increase magic spells' power, cast time, range and other various attributes. It becomes available in Chapter 2 after Operation Reconquista, when Arecia Al-Rashia opens the portal to Altocrystarium near Classroom Zero. Class Zero cadets are the only cadets in Akademeia allowed to use the Altocrystarium. The Altocrystarium has the motif of Etro's gate on it

, a recurring symbol in the Fabula Nova Crystallis games.

Upgrading a spell requires the player to connect with the Altocrystarium before any collected phantoma can be used. Only the spells that have been unlocked can be enhanced. The player can check in the Altocrystarium menu, or select "Altocrystarium" from a relic terminal to see which spells can be upgraded.

The required phantoma type and amount differs depending on the type of spell, level and property to be enhanced.

When upgrading spells, the player can select from one to five properties to enhance. These differ depending on the spell. Each property level has a maximum and minimum.

The property increase depending on level of each property is as follows:

The strength of each property is shown by level. When upgrading a property, there is some random variance to the end result, and the player can retry the upgrade before committing. Upgrading a property will usually decrease another property, typically MP Cost. If the player has an ivory phantoma, it can be used during an upgrade to both greatly increase the boost from the upgrade, as well as removing the penalty to other properties.

Upgrading a spell with Ivory Phantoma. 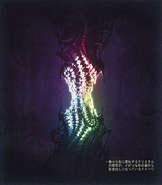 [view · edit · purge]Alto is Italian for "high". Altus would be the correct term in Latin.