A kingdom, that's what I'm ready to sacrifice.

Princess Althea Sol Alfitaria is a Lilty in Final Fantasy Crystal Chronicles: The Crystal Bearers, who is accompanied by her pet ferret, Mia. She is a princess of the Lilty kingdom Alfitaria, and the daughter of the King and Queen Alexis. Althea has one of the three royal Crystal Idols with her at all times, using it to hide the ornate crystal patch on her chest that marks her as Crystal Bearer.

Althea is a young woman with long blonde hair that is tied up in a ponytail, green eyes and glasses. She wears a burgundy shirt under a cropped blue jacket and a red cravat with a green gem in the center. She wears white gloves and has a crystal embedded in her chest. She wears gold suspender shorts with a thin yellow belt and a gold holster-type belt with two pouches on both sides. She wears black thigh-high socks and brown ankle boots.

During a dance, she wears a long pink and gold gown with a green gem in the center, white stockings and pink high heels.

She is responsible and down-to-earth, and her people admire her sharing her father's intent for peace among the tribes, though a bit fearful of the Yukes' curse placed on the Lilty crystal and its invoking should the Yuke Crystal be restored.

Althea shows an overall respectful and humble demeanor, apologizing for her pet's troubles and acting as a simple civilian in her walks through the city. She nonetheless knows how to be firm if needed, seeking justice above all, thus showing potential to rule Alfitaria. With her sense of leadership, she rarely allows her emotions to show, instead bottling them beneath a serious guise.

Althea's powers can protect herself from Jegran, and she attempts to protect the Lilty tribal crystal from being destroyed by the curse placed upon it by the Yukes. She is immune to magic, as she touches Jegran's arm repeatedly and is not crystallized. This would explain why Amidatelion could not summon her, or why Layle could not use his Gravitokinesis on her when she asked what his power was. Althea can focus her powers to create magical force fields, seen when she is protecting the Lilty Crystal from the Yukes' spell.

Her mother died while she was still young, and Althea is forced to maintain her father's wishes as she attempts to conceal his current status of being turned into crystal from the public, in fact, it was Althea who found her father's crystallized remains on the cockpit of the decommissioned Alexis.

She befriends Layle after he kept the Alexis II from crashing into Alfitaria and saw him as a means to uncover the cause of her father's illness, even attempting to ask if he knows a Crystal Bearer with healing powers and how she would give up her kingdom for her father's well-being.

Jegran smashes her father to bits as he offers her the world. She refuses, and is knocked unconscious when Jegran attempts to crystallize her, but fails as her Crystal Bearer powers protect her, learning her secret. After Layle saves her, Althea uses a Zu to make her way to the Lilty Crystal as the Yukes' spell takes effect on it. With their tribal crystal is restored before the Yuke takes over it. Later, now crowned queen of Alfitaria and her Crystal Bearer powers gone, Althea begins to rebuild her kingdom while restoring relations to the Yukes.

Althea appears as an Aqua-elemental card. 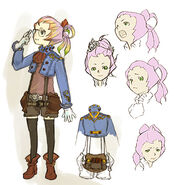 "Althea" is a Greek name that means "healer", while "Sol" is a male name of Spanish origin that means "sun".