Spike Spencer
Alternis Dim is a non-playable character from Bravely Default, Bravely Default: Praying Brage, and Bravely Second: End Layer. He is a member of the Council of Six, keeper of the Dark Knight asterisk, and is loyal to Braev Lee.

A knight encased in jet black armor. One of the Council of Six, and an old friend of Edea. He shattered the skystone on the Eschalot.

A twenty-three-year-old man of unknown origin. His name is Alternis Dim, bearer of the dark knight asterisk. Wearing jet-black armor and wielding a dark blade, he is a solemn warrior who takes his duties very seriously.

Alternis wears a full suit of black armor with gold accents, his face is usually obscured by his helm. He wields the red-bladed sword Darkbringer, given to him by Braev Lee.

Alternis is a solemn warrior who takes his duties seriously. He has little regard for distractions and goes straight for his target. However, he appears to care for Edea Lee, whom he grew up with, very dearly. Alternis is extremely loyal to the Templar and carries out his orders with little hesitation—unless it concerns Edea. On multiple occasions, he attempted to resolve with his old friend peacefully rather than with his usual blunt violence.

A short time in the past, Alternis became an officer in the forces of the Duchy of Eternia. During his travels, he kept a journal of his activities. One of his earlier assignments was overseeing the construction of the Eschalot, an airship, before delivering it to the Sky Knights. He later volunteered to go undercover to Caldisla to survey its defenses; in his undercover identity, he gains the trust of the citizens. During his stay, the Great Chasm opened up and swallowed the village of Norende. Alternis was responsible for rescuing Tiz Arrior, the village's only survivor. After two weeks, he returned to the Duchy. He was given a new mission to study the changes stemming from the Great Chasm.

While carrying out his orders, Alternis encounters the vestal's group at their stolen airship, the Eschalot. There, he incapacitated Tiz and attempted to capture Agnès Oblige, the vestal of wind. However, Edea recognizes him and confronts him. Surprised by Edea's treachery, he refuses to fight her and flees, though not before shattering the ship's skystone, rendering it earthbound and inhibiting their travels. Alternis would report to Eternia, where he reveals Edea's treason to the Council of Six. Two of the other members of the Council, Victor S. Court and Victoria F. Stein decide to go apprehend Edea and the vestal themselves. When Alternis questions this action, Braev insists that anyone who assists the vestal must suffer.

After Agnès awakens all four crystals, Alternis awaits them at the Holy Pillar, with the goal of stopping them from completing the ritual. Alternis engages the vestal and her companions in battle, but is defeated. As he falls into the Holy Pillar, Alternis's face is revealed to be identical to Ringabel, the amnesiac young man who joined Agnès's party. After encountering another version of Alternis in the next world, Ringabel realizes that he is an Alternis from another world that fell into the Holy Pillar after failing to protect Edea when she and her comrades were killed by Airy. For reasons yet to be explained, as shown in the true ending, Alternis Dim is brought back to his reality.

In the worlds that follow, Alternis's fate is altered. In the Third World, anguished over the death of his world's Edea, Alternis battles the party at Eternian Central Command. After being defeated, he asks Ringabel to take his place because he has no willpower to go back to the Council nor the armed forces, and is hinted that he lets himself die. In the Fifth World, Alternis gathers all the leading members of Eternia's military force back to Eternian Central Command where he leads a line of defense consisting of Barras Lehr, Praline à la Mode, and Hayreddin Barbarossa.

After the defeat of Ouroboros, Alternis is given a task by Braev to be of service to anyone in need in Luxendarc. This brings him to Grandship as consequence where he becomes helps the community. But when Alternis learns that Eloch Quentis Khamer VIII, Grandship's self-appointed Minister of Taxes, plans to abolish taxes meant to help the poor and orphans, Alternis voices against it despite being told that the taxes would doom Grandship's economy.

If Edea supports Khamer's intentions, feeling betrayed while losing against her in battle, Alternis runs off and is last heard still helping the poor. But if Edea supports Alternis, she tells him that there needs to be a middle ground for Grandship's sake as the nation learned to maintain itself through exports.

Alternis is fought as a boss.

Alternis is fought as part of a sidequest.

Alternis appears as an obtainable unit.

Mecha Banner.
Add a photo to this gallery

This section in Bravely Archive is empty or needs to be expanded. You can help the Final Fantasy Wiki by expanding it.

This section in Bravely Default: Fairy's Effect is empty or needs to be expanded. You can help the Final Fantasy Wiki by expanding it.

Alternis appears on a sticker set for the LINE communications app. The sticker set he appears in is titled "Bravely Stickers - Volume 1".[1] 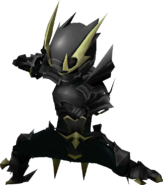 Artwork of Alternis and Egil.

Alternis in the manga.

'Alternis Dim' stands for "alternate dimension", as the character represents a major turning point in the storyline. His Japanese name (アナゼル・ディー, Anazeru Di?) can be pronounced to sound like 'Another D', the letter D standing for 'dimension' as well as alluding to the author of D's Journal and that he is another "Ringabel".