Non-player character
Altana is a goddess from Final Fantasy XI. She is the Dawn Goddess and creator of Vana'diel.

It is said that she created the Zilart, but once they were destroyed, she wept five tears down on the world that created of the five races: Hume, Elvaan, Tarutaru, Mithra, and Galka. The Twilight god Promathia resented this, and created evil monsters that would seek to destroy Altana's creations. Promathia also cursed each of the five races with one negative trait each, for example, the Elvaans became arrogant.

Altana appears in a single cutscene, but is often mentioned and is the central character for the religion in Vana'diel, represented by the San d'Orian Cathedral.

Altana appears intervenes at the end of Chains of Promathia. When the battle against Promathia reaches its peak, a burst of light shoots down upon the twilight god, and he hears Altana's voice. Then Promathia and his rage are gone.

In Final Fantasy XI: Wings of the Goddess, it's revealed that the primary Crystal War timeline ended with the Shadow Lord's victory and extermination of the five enlightened races. Altana decided to intervene by creating Cait Sith, Atomos, and the Threshold as a system of rewriting the timeline to ensure the defeat of the Shadow Lord.

Final Fantasy XI: Rhapsodies of Vana'diel marks the only time she appears on screen. She summons the adventurer and their corrupted doppelganger into her realm to explain that they're the light and dark aspects of the same person and need to unite to become whole.

Altana in the 25th Anniversary Poster of Final Fantasy.

Altana as she appears in Rhapsodies of Vana'diel.

Altana statue in the Hall of the Gods. 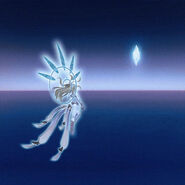